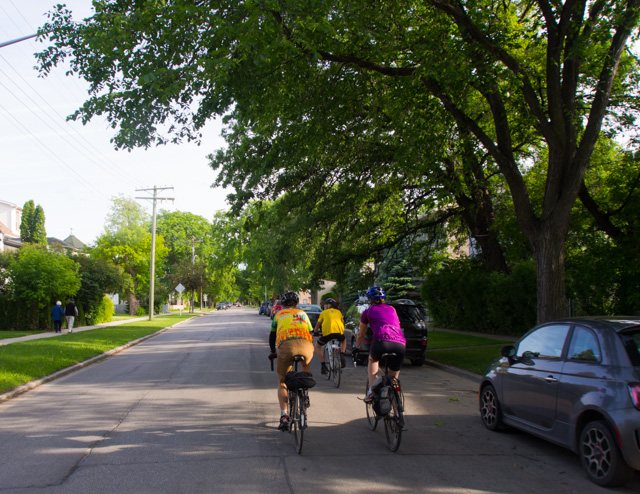 While professing to be advocates for those who want to walk or bike in our city, Councillors Browaty, Schreyer and Wyatt managed to pass a unanimous motion at yesterday’s special meeting of the East Kildonan – Transcona Community Committee to slash the budget for the City’s Pedestrian and Cycling Strategies by 84%, from $334 million to $55 million over 20 years. Their proposed budget for pedestrian and cycling infrastructure would be limited to projects that are part of existing road renewal programs, development projects and major projects. In other words, they are proposing that unless pedestrian and bicycle facilities are part of infrastructure for cars, there will be no money to:

While the Councillors seemed to imply that the $334 million cost to implement the strategies over 20 years would all go towards the bicycle network, nothing could be further from the truth. The strategies would expand and improve the sidewalk network to make it more comfortable to walk, and improve safety and connectivity for people on foot. The proposed strategy is just what it says it is — a “pedestrian and cycling “strategy. Of the $334 million investment required to implement the 20 year strategies, $138 million, or a little over a third of the total is actually dedicated towards improvements to the bicycle network.

There may well be aspects of the strategies that can be improved and debated, but the motion put forward by the Councillors is not helpful and will not lead to constructive discussion or debate. City Council should firmly reject the motion as a poorly conceived and self-contradictory reaction by Councillors who are grasping at every opportunity to undermine and delay the proposed pedestrian and cycling strategies, without apparently taking the trouble to read or understand them.