The Osborne Street Underpass has to be one of the biggest barriers to cycling in the City of Winnipeg. People on bikes are squeezed up against a giant wall of concrete and forced to share a narrow, pot-holed roadway with a an endless stream of buses, trucks, and cars. 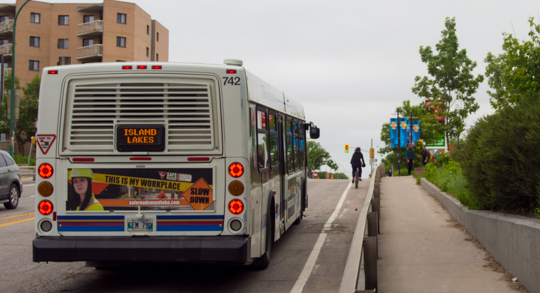 The good news is that preliminary design work for a major rehabilitation of the Osborne Street Underpass is scheduled for 2019, and will study provisions to widen the underpass so that it can accommodate pedestrian/cycling pathways.

However,there is currently no funding in place to carry on rehabilitation work, and the City’s 2018 Capital Budget notes that rehabilitation of the Osborne St Underpass will not proceed to detailed design until the pedestrian and cycling network north past Confusion Corner and South to the St. Vital Bridge has been determined and becomes a priority to construct.

Two projects are underway or scheduled to begin in the near future to address gaps in the bicycle network and provide a connection from the St. Vital Bridge north past Confusion Corner. The Churchill Pathway – Churchill Dr to Togo project is scheduled for development over 2019 and 2020, and will fill in the gap between Brandon Ave and Togo Ave on the bike route between The Forks and the St. Vital Bridge along the Churchill Pathway and the Hay St Neighbourhood Greenway.

The second project tasked with determining how the biking network will provide people on bikes with a safe connection north of Confusion Corner from the St. Vital Bridge is the Osborne to Downtown Walk/Bike Bridge and Connections study.

Absent to date from plans presented in the Osborne to Downtown Walk/Bike Bridge and Connections Study are a desperately needed connection from the Osborne St Underpass to the east/west bike routes north of Confusion Corner that have been offered up as potential connections to the proposed bridge.

In particular, the study has looked into, but abandoned any plans for a signalized or grade separated crossing of McMillan/Donald at Scott Street to provide a direct route between the Osborne Underpass and the Osborne to Downtown Walk/Bike Bridge.

We are asking for three commitments from candidates with respect to the Osborne St Underpass: