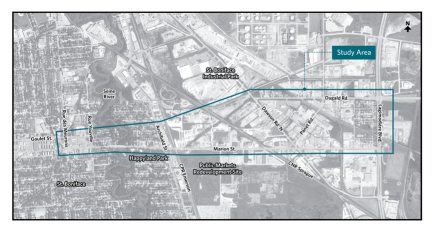 The project includes a study of the Marion Street-Dugald Road connection, also known as Metro Route 115, to identify options for the realignment and/or widening of Marion Street, and to grade separate at the CPR Emerson railway which runs parallel to Archibald Street. The project will work toward reducing congestion, improving safety, and incorporating new or improved transit, bicycle and pedestrian facilities to improve traffic flow throughout the study area. The improvements could include substantial widening and realignment of Marion Street and an overpass or underpass near Archibald Street.

Bike Winnipeg’s Ideas to Improve Cycling on Marion and Lagimodiere

The Public Markets site is designated as a major redevelopment site in Complete Communities (Area D). Marion will be a major connection for this community once redevelopment takes place.

The study area needs to be extended west to Enfield Crescent to accommodate the needs of cyclists.

Upcoming Projects that Need to be considered in Project Plan