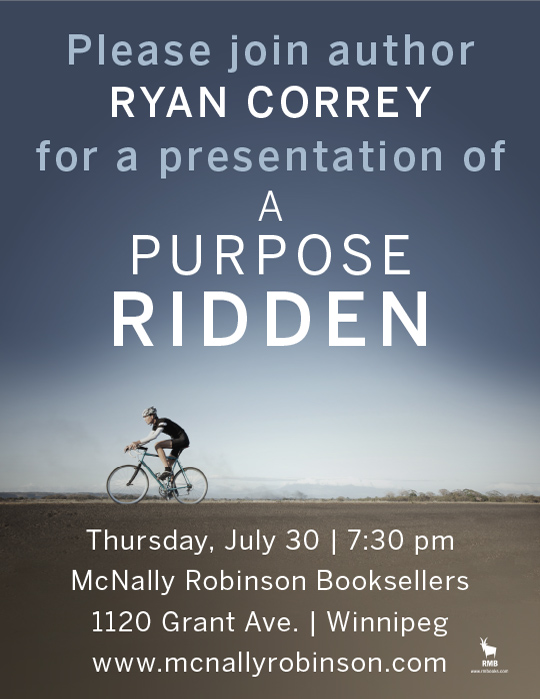 Members of Winnipeg’s cycling community are invited to come meet and talk with Rocky Mountain Books author Ryan Correy will be at McNally Robinson in Winnipeg on July 30 and at Alter Ego Sports on July 31 to talk about his new cycling memoir, A Purpose Ridden. The event is part of his cross-Canada tour for the book and as the Fuelling Guru for Hammer Nutrition.
A Purpose Ridden
by Ryan Correy
paperback, $25 | May 18, 2015

In the summer of 1996, a father and his 13-year-old son embarked on a 3400 km bicycle tour across Canada. Affectionately known as “Manhood Training,” this unique bonding experience became the inspiration for Ryan Correy to break away from convention and turn a passion for cycling into his purpose in life.

The world’s most extreme cycling challenges serve as an evolving proving ground for the young rider – including self-doubt on a solo tour to Arizona after high school, falling asleep and crashing into a cemetery gate on the gruelling Race Across America (“The toughest sporting event in the world”), murder and robbery along the Pan American Highway (“The longest road in the world”), a near mountaintop helicopter rescue while traversing the infamous Tour Divide (“The longest mountain bike race in the world”), cashing in after being hit by a car in California, hallucinations and foot-crippling pain on a six-day, 20-hour stationary cycling world record attempt, and plenty more.

A Purpose Ridden is an honest and often obsessive first-hand account of becoming one of Canada’s most respected adventure cyclists. Ryan shares in great detail the sponsorship woes, the evolution of his ego, an admiration for flawed role model Lance Armstrong, the many accolades earned, family tragedy and, of course, the evolving relationship with his father, their fights, and friendships lost along the way. The path less travelled begins with a paternal taunt: “We’re close enough to home. If you want, we can call your mother to come and pick you up now.”

Ryan Correy is an Ecotourism and Outdoor Leadership graduate who has taken on many of the world’s toughest cycling challenges, including a 25,000 km tour from Alaska to Argentina; the grueling 4828 km Race Across America; the 4418 km of remote mountain terrain on the Tour Divide; and a crippling 6 day, 20 hour stationary cycling World Record attempt. In between planning his next adventure, Ryan regularly speaks to groups of athletes about endurance and how to turn passion into purpose. He also serves as the Fueling Guru for Hammer Nutrition Canada—giving advice to amateur and professional athletes alike. Ryan lives in Burlington, Ontario, with his equally ambitious girlfriend, Sarah.