Back by Popular Demand!

Celebrate the Labour Day weekend by joining Bike Winnipeg for StrikeBike!, a guided bicycle tour of sites linked to the Winnipeg General Strike of 1919.

Strike! Musical Composer/General Strike Historian Danny Schur will be our guide on this casually paced tour that winds its way from River Heights into the Downtown and the Exchange Districts. 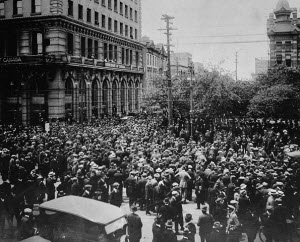 Relive the events of General Strike as we stop at many of the sites where history unfolded during the spring of 1919; events that eventually became the platform for future labour reforms across Canada.

The StrikeBike! tour starts in the parking lot of 529 Wellington at 10am and will run for about 2 hours.