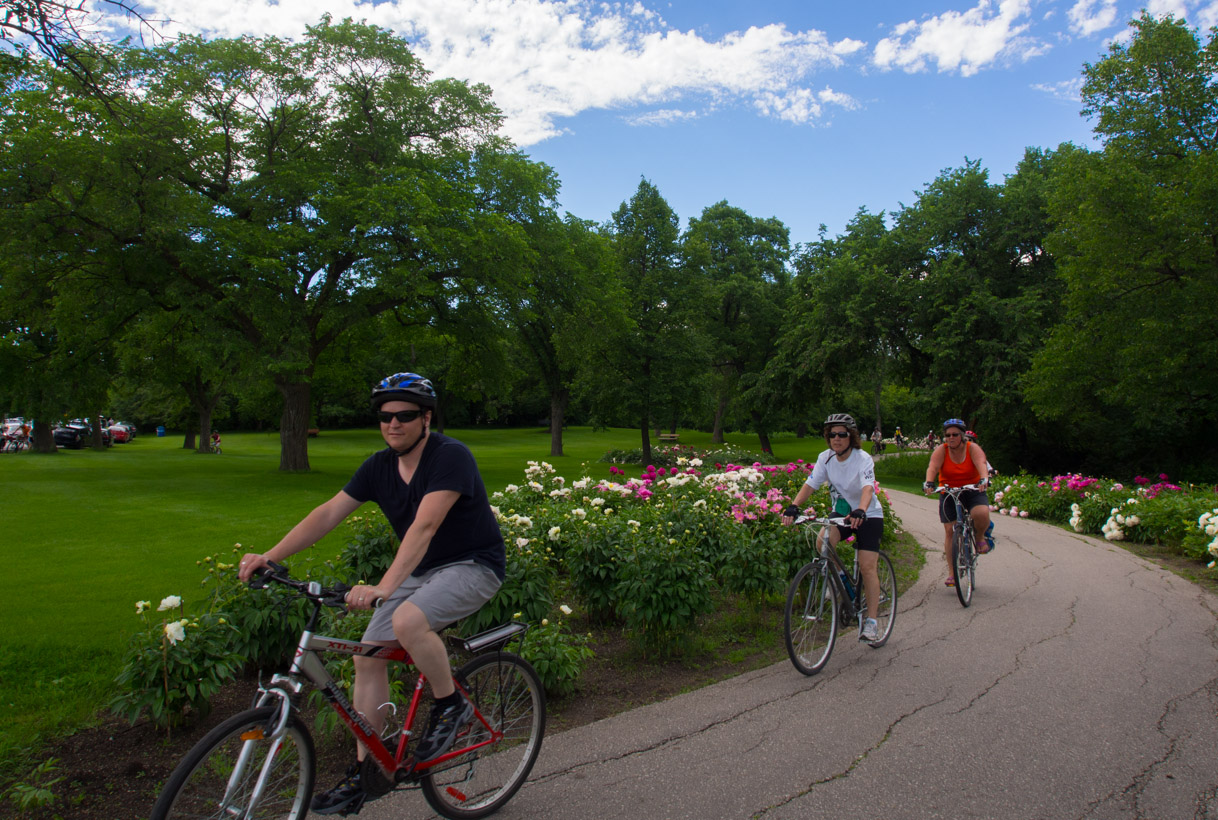 Bike Winnipeg put together a number of guided bike tours between April and October each year, as well as a few select winter rides. These 2-3 hour tours are interpreted by lively and knowledgeable experts and guided through the city by ride marshals to help ensure your comfort and safety. All tours travel at a leisurely pace with plenty of stops along the way.

We offer a mix of free and paid rides. Space on the rides is limited, so register early to reserve your spot!

If you can’t fit one of these rides into your schedule, please take a look at some of the self-guided tours we and other organizations are offering.

Join Bike Winnipeg and the Winnipeg Arts Council on an informative ride and get to know the artwork that punctuates and brightens your city!

Rides run 2 to 2 1/2 hours, and are always at a casual pace, with lots of stops along the way where you’ll have the opportunity to learn a bit more about some of our favourite public art works.

This 13km tour will start and end at Seel Station Park & Ride. Artworks we will visit include:

This 7km tour will start at the fountain behind the Manitoba Legislative Building. We will visit public artworks including:

This 13km tour will start and end at Seel Station Park & Ride. Artworks we will visit include:

Ride participants are guided between historic sites by bicycle, and treated to in-person interpretation relating to the history of each site, local community and early Manitoba.

We all know this year marks Manitoba’s 150th birthday, but how many of us really know the people and places that led to our province’s foundation?

This family-friendly ride along the scenic Red & Assiniboine Rivers will introduce you to the remarkable characters and exciting events that helped our home take shape.

The tour will help you better understand:

Across the Assiniboine (August 8th)

Winnipeg’s role as “Gateway to the West” made us more than just a metropolis: Our city became a model for Canada’s west-ward expansion, settlement, and colonization. What did that process really mean for the people of Manitoba, and what lessons can we learn from our rich architectural heritage?

This 10km tour will take you through the most historic neighbourhoods along the Assiniboine river. Along the way we’ll talk about the history of our city’s western expansion, and the impact colonization left on the prairies.

The tour will help you better understand:

This casually-paced tour will take us into the lap of luxury, exploring the beautiful old buildings in Old Winnipeg’s most exclusive neighbourhoods.

It’s no coincidence that many of Winnipeg’s most remarkable mansions are clustered along the Assiniboine River. From Armstrong’s Point to Wellington Crescent, we’ll be tracing the development of this area from backwoods bush to the seat of political and economic power.

Winnipeg was once known as the “Chicago of the North”, and our historic architecture reflects that rich past. At the same time we developed a reputation as a wild west town, filled with outrageous characters who made their own rules.

We’ll be tracing the history of our city’s early elites: Visiting corrupt land barons, abusive mayors, and a wealthy Metis woman who taught racist writers what “respect” means on the prairies.

Some of the sights we’ll visit along our way include:

St. Boniface, Point Douglas, and (West) Kildonan were perhaps the three most important settlement areas during the early Red River Settlement period, and offer many of the remaining examples of historic locations and architecture from the time.

Although their histories are deeply intertwined, each area had its own ethnic, cultural and political dynamics, and the people of each shaped the development of early Winnipeg in distinct ways.

Winnipeg’s cycling culture comes together during Bike Week Winnipeg (June 7th-13th) for a week of events celebrating the bike. Hop on your bike and join us on a ride.

We typically offer a number of rides that fall outside the above. These include rides that help explore some of the city’s festivals (Doors Open, Folklorama, …) or learn about the city through partner organizations such as Save Our Seine, Green Buildings Council, or the MB Master Gardeners Association.

We are thrilled to be able to offer this tour once again!

We are offering two tour options on Saturday, September 11th:

Few people think about St. Vital as a place that is connected in many ways to Louis Riel.

The idea behind the tour is to create a greater awareness of the important role St. Vital played in Louis Riel’s life and introduce the many connections to Riel and his immediate family that exist in St. Vital. It has been a journey of discover, often on my bicycle, for me to learn about these connections and I am hoping to convey insights that I have acquired to others. The tour consists of nine sites near the Seine River between Bishop Grandin and John Bruce Road, and 4 sites away from the Seine River including Riel House National Historic Sites. Because of the long distance between some of the sites, we decided to offer a bike tour as a walking tour would take too long.

Why so many connections to Riel in St. Vital?

What few people realize is that Louis Riel spent a significant portion of his youth living in St. Vital. His parents moved to St. Vital from St. Boniface in 1852 when he was 7 years old. He lived on the banks of the Seine River in St. Vital with his parents for seven formative years from age 7 to 14. At age 14 he went to Montreal on a scholarship to attend a seminary where he trained to be a priest and received a classic upper school education. He returned to Manitoba in 1866 rejoining his family in St. Vital. While he was leading the Red River Resistance in 1869/70, he continued to live with his family near the Seine River in St.Vital.

His parents continued living in St. Vital for the remainder of their lives, Many of his 10 brothers and sisters settled down in St. Vital, As we will discover on this tour, the St. Vital connections to Riel involve not only Louis but also his parents and other family members

The values, beliefs, and leadership qualities that Louis exhibited in his later years were acquired during his youth, from his parents, his Catholic religion and the Franco / Metis culture he belonged to.

As well, participants will

Away from Seine River

Denis DePape is a former Board Member of Bike Winnipeg and of Save Our Seine. He is an avid cyclist, frequent user of the trails and forest along the Seine River in St, Vital and Manitoba history buff.

A woman vanishing into thin air at the Hotel Fort Garry. Spirits reaching out from beyond the grave at the Pantages Theatre. Just what is happening in Winnipeg’s heritage buildings at night? Early Winnipeg was a booming city full of excitement with no shortage of murders, cheating lovers and tragic accidents; all play a role in Winnipeg’s reputation as one of Canada’s most haunted places.

Based on the popular Winnipeg Ghost Walk Tours, Bike Winnipeg has paired up with local author Matthew Komus (Haunted Winnipeg: Ghost Stories from the Heart of the Continent) for a two-wheeled tour of the city that promises to put more than just a little bit of fright into your night.

This 2 hour tour will lead us across the Downtown and Exchange Districts and into Old St. Boniface to investigate some of the spookier abodes in the River City.

Tour size is limited, so purchase your ticket now to reserve your spot on this ride into Winnipeg’s haunted history!

Please make sure that you bring your bike lights.

“Winnipeg stands very high among the places we have visited for its psychic possibilities.” – Sir Arthur Conan Doyle

The Pedal Powered Ghost Tours continue with strange and spooky tales from the distant past.

Learn about paranormal activity inside Seven Oaks House Museum and embark on a tour of the Seven Oaks neighbourhood led by Matthew Komus, author of Haunted Winnipeg, who will share eerie stories along the way.

Participants will hear of a historic battle that continues to be fought to this day, visit the oldest haunted house in Winnipeg and even learn of the community’s connection to the top secret Manhattan Project.

Based on the popular Winnipeg Ghost Walk Tours, Bike Winnipeg has paired up with local author Matthew Komus (Haunted Winnipeg: Ghost Stories from the Heart of the Continent) for a series of two-wheeled tours that promise to put more than just a little bit of fright into your night.

Tours are approximately 2 hours in duration, and will cover about 10km.

Tour size is limited, so purchase your ticket now to reserve your spot on this ride into the haunted history of Seven Oaks!

Please make sure that you bring your bike lights.

“Winnipeg stands very high among the places we have visited for its psychic possibilities.” – Sir Arthur Conan Doyle

To help ensure the safety of our ride participants, volunteers, and staff, we will be asking everyone to maintain a 2m distance between each other at stops and while riding. Sites have been selected to ensure space for social distancing, and we have limited ride sizes.

If you are experiencing any symptoms, we ask that you please stay home. We will be more than happy to provide a refund. Finally, please note that we are not requesting the mandatory use of masks during our rides.