The painting of bike lanes on Winnipeg’s downtown streets, which started in 2009, helped start Winnipeg’s slow march towards bikeability. And while this has encouraged an increasing number of people to use their bikes to reach their work, shopping, or entertainment destinations downtown, for many people the level of comfort and protection provided by a painted bike lane falls well short of the threshold that would convince them to abandon their car and ride their bikes downtown. 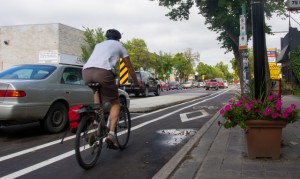 Following the installation of a two-way protected cycle track on Assinniboine Avenue in 2010, regular counts of cycling traffic have shown that the number of cyclists traveling down Assiniboine has increased by more than 200%. Clearly, Winnipeg residents have been encouraged to switch to their bikes where protected bike lanes are provided. 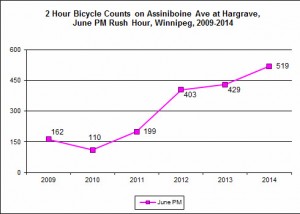 Bicycle Traffic on Assiniboine Ave has increased by over 200% since a protected cycle track was installed in 2010.

Given the importance of Winnipeg’s downtown as an employment, education, shopping and education destination, the downtown protected bike lanes need to identified as the highest priority in the city’s cycling networks implementation plan.