Adopt Policies to Get More People Walking and Cycling

Vision Zero began as a Swedish road safety initiative in 1997. It can be summarized in one sentence: No loss of life is acceptable. Human life and health are paramount values and can never be exchanged for other benefits within the society. This approach recognizes that human mistakes are inevitable so this is taken into account when designing the road transport system. To prevent deaths and serious injuries, it focuses on traffic systems, placing more responsibility for safety on system design, management and leadership. In every situation a person might fail; the road system should not. Principles for Vision Zero include:

Solutions include: When Vision Zero was first launched, Sweden recorded seven traffic fatalities per 100,000 people; by 2014, despite a significant increase in traffic volume, that number was fewer than three. This suggests that safety need not compromise mobility.

Across the globe, many countries have embraced its principles and adopted their own version of Vision Zero. In Canada, in 2015 Edmonton announced it was the first Canadian municipality to adopt a ‘Vision Zero’ strategy. In June 2016 Toronto responded to criticisms of its Road Safety Plan by setting a goal of zero deaths within five years instead of the previous 20% reduction in 10 years. At a provincial level, British Columbia, in line with the Vision Zero movement, has set a goal to have the safest roads in North America by 2020 with the ultimate goal to eliminate motor vehicle crash fatalities and serious injuries. More Information
Posted in 2018 Election Backgrounder | Leave a comment

Improve Accommodation of People on Foot & Bikes During Construction Work

Include New or Improved Walking & Cycling Connections in Developer Agreements

Maintain Our Walking and Cycling Networks Year Round

Fund the Development of Winnipeg’s Walking and Cycling Network 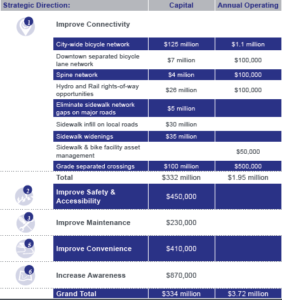 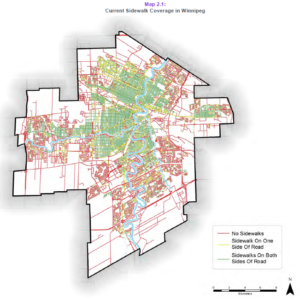 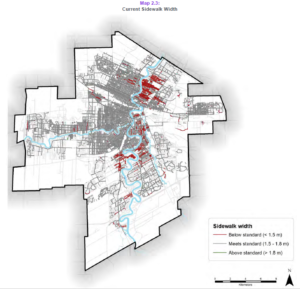 As the city moves forward with implementation of the Pedestrian and Cycling Strategies and its Climate Action Plan, a monitoring strategy that counts how many people are walking or biking along our sidewalks, roads, and pathways is needed to ensure that the strategies are being implemented as intended, and to determine whether the plan is achieving its goals. In addition, a monitoring program may be required to access provincial and federal funding aimed at reducing greenhouse gas emissions. 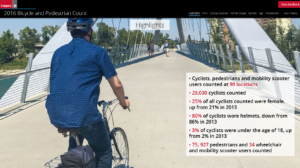 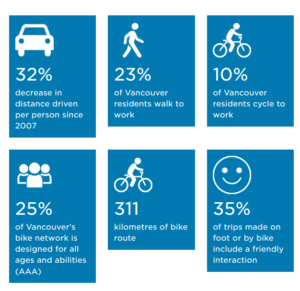 Get More People Walking and Cycling

Providing new infrastructure and new or improved services is a proven way to increase the number people walking, biking, or taking transit for their day to day travel, but new infrastructure or services shouldn’t be considered as standalone investments. To gain the most from our investments in sustainable transportation, we also need to reach out to people who live, work, and play in the areas served by those services/infrastructure and encourage them to use it.

Targeted marketing campaigns, or individualized marketing provide tailored outreach to educate people about their travel choices. This customized information allows each marketing program to focus on the unique travel needs of an individual neighbourhood, institution, or audience. It’s an effective way to bridge the information gap and support a change in travel behaviour — driving less and using alternative travel options more. In fact, it’s been shown to decrease the number of kilometers being traveled, especially when initiated alongside major transit service and/or infrastructure projects that make it easier to walk, bike, or bus.

As SmartTrips program manager Linda Ginenthal points out in a 2014 BikePortland.org article, “It cost us a million dollars to do the SmartTrips program,” she said. “And we spent many, many millions of dollars on light rail and it got us a 3 percent reduction in trips. You do the math.”[4]

SmartTrips and TravelSmart projects have been shown to reduce drive-alone car trips by area residents within the SmartTrips service area 9% to 13%, with a corresponding increase in walking, bicycling, and transit mode shares 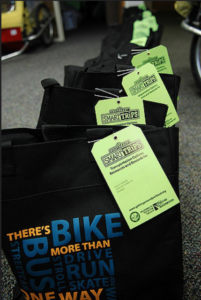 A Portland Smart Trips bag ready to go out in 2007.

In Winnipeg, we are suggesting that the city launch an individualized marketing program that will reach 20,000 households per year, starting in 2020 with the opening of the Southwest Rapid Transit Corridor. Program planning would need to begin in 2019.

Continue & Expand Funding for The W.R.E.N.C.H.