When the Osborne Bridge was rehabilitated in 2012, a critical shortcoming of the project was the lack of connectivity at the southern end of the bridge linking into Roslyn Road and onto Nassau (the selected east/west alternative to Osborne Street). 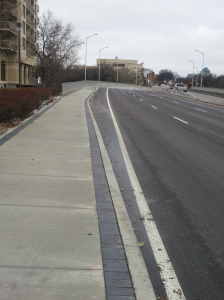 Similarly, the proposed addition of bike lanes to Roslyn Road between Nassau and Osborne have never materialized. The Nassau-Assiniboine Connection project would eliminate the existing southbound gap in the bike lane and minimize and mitigate the northbound gap.

The main constraints for continuation of the Osborne Bridge bike lanes southward to Roslyn Road were the presence of the Roslyn Square Apartments on the east and the Shell Station on the west side of Osborne.

As the Roslyn Square Apartments are designated as a heritage building, a similar property acquisition and demolition to make room for a northbound bike lane is not an option. However, there is the possibility of widening the roadway to the north of the Roslyn Square Apartments parking lot. Extending the bike lane from this point would decrease the length of the gap between Roslyn Road and the start of the northbound bike lane to about 60m.

To provide connectivity between Nassau  and Osborne, the Nassau-Assiniboine Connection project would complete the Roslyn Road bike lanes promised during the 2010 Active Transportation Stimulus Program. 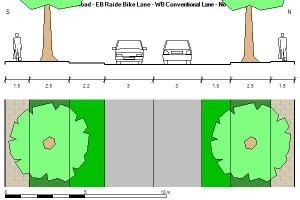 Bike Lanes on Roslyn Road would increase roadway capacity while improving the level of comfort for cyclists.

As eastbound Roslyn Road suffers from considerable traffic congestion during the morning ruch hour, the addition of bike lanes will allow cyclists to bypass this congestion, increasing the capacity of the roadway. 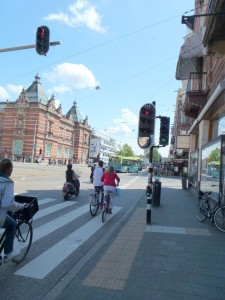 To help facilitate left turns off of Roslyn onto Osborne and to mitigate the 60m gap in the northbound bike lane on Osborne,two features would be added to the Roslyn/Osborne intersection.

Components of the Nassau-Assiniboine Connectivity Improvements Project (in green)