Extending and improving the cycling facilities along St. Mathews Avenue would create the type of high quality cycling route that would serve as a central spine in the city’s cycling network.

Starting from the northeast corner of the Assiboine Golf Club where the Yellow Ribbon Trail bends south to connect with Silver Avenue, a new pathway would be built along the northern boundary of the St. James Gardens and Memorial Sports Park to create a more pleasing and direct connection to the intersection of St. Mathews and Ferry Road.

Between Ferry Road and Century, parking would be removed along St. Mathews to allow for the installation of buffered bicycle lanes. In the few areas where there is strong demand for on street parking, parking bays would be built to retain parking. 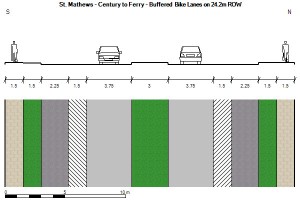 Buffered bike lanes on St. Mathews between Century and Ferry

Parking can be added where merited by demand

While conventional bike lanes and sharrows were added this section of St. Mathews between Empress and Arlington in 2010 as part of the stimulus funding AT projects, the treatment chosen was far less desirable than the treatment presented during the public open houses, and has been seen as a failure by most cyclists. To provide a safe, convenient and comfortable riding experience, one lane of parking would be removed and this section of road would be rehabilitated to include protected bicycle lanes on either side of the road. As there is very low utilization of parking along this stretch of St. Mathews, removal of a single lane of parking will not have an effect on the the availability of on street parking. 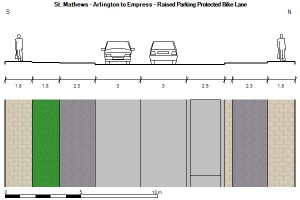 Where the right of way on St. Mathews narrows between Arlington and Maryland, parking would be removed to make way for conventional painted bike lanes. 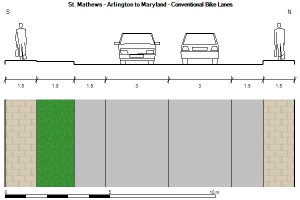 Conventional bike lanes would be painted between Arlington and Maryland