A Once in 25 Years Opportunity to Improve Transportation Options

The reconstruction of Clarence Avenue between Marshall Bay (West Leg) and Pembina Highway in 2015 offers an opportunity to make improvements to pedestrian and cycling infrastructure on what will be an important neighbourhood connection to the buffered bike lanes planned along Pembina Highway and the planned Clarence Transit Station and Park & Ride site being developed as part of the Southwest Rapid Transit Corridor. Both projects are slated for development within a five year time span, so making use of the planned reconstruction work to improve pedestrian and bicycle connectivity along this stretch of Clarence Avenue affords the city the opportunity to maximize the benefit of its investment in these three projects.

A potential configuration of Clarence Avenue with equitable access provided for all street users.

Experience in Winnipeg has shown that the provision of protected bike lanes can vastly increase the number of people biking to and from their destinations. This is especially true of projects that provide connectivity between highly desirable destinations.   For instance, since the installation of a protected cycling facility on Assiniboine Avenue, the number of people choosing to bike down that road has increased by over 225%. As a potential connection between the southwest rapid transit corridor, services and shopping along Pembina (which will soon be services by protected bike lanes), and the Crescent Park neighbourhood, this section of Clarence Avenue has tremendous potential as a critical link in Winnipeg’s developing bicycle network. 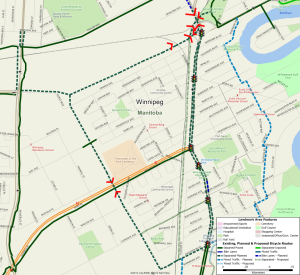 Protected bicycle lanes along Clarence Avenue have the potential to greatly improve connectivity to current and planned bicycle facilities in the Maybank and Crescent Park neighbourhoods.

Planning for the Southwest Rapid Transit Corridor includes provisions to create a protected bicycle facility along Chevrier Boulevard between Pembina Highway and the rapid transit corridor. Chevrier and Clarence have very similar roadway and right of way profiles, meaning that design work can be shared between these two projects.

To a large extent, the success of the southwest rapid transit corridor will be judged on its ability to attract people to transit and reduce the number of people choosing to drive to their destinations. At a distance of approximately 800-1000m from Pembina Highway, the proposed Clarence Transit Station will be beyond the range of people walking from the east side of Pembina Highway. However, it is well within the range of people who might choose to bike from their homes to the Clarence Transit Station if safe, low stress access can be provided.
Planned Southwest Rapid Transit Corridor and Active Transportation Pathway 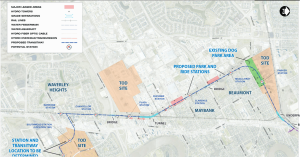 Slated to begin contraction in 2016, the southwest rapid transit corridor will provide a separated pedestrian and bicycle facilities linking the University of Manitoba to the Downtown and many destination in between. 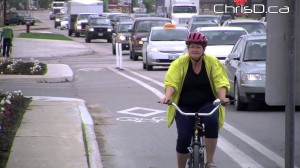 The City of Winnipeg has made great strides to improve conditions for people biking down Pembina Highway in recent years, and has plans to extend these improvements along the full length of Pembina over the coming years. Photo courtesy CHRISD.CA..

As one way facilities, it is important to ensure that people biking on Pembina are provided with the ability to enter and leave the buffered bike lanes from low stress bike routes with as little need to detour as possible.  On Pembina, that will generally require that quality bi-directional facilities provide connections at all signalized intersections.

This will provide a high quality link between the pedestrian and bicycle facilities planned as part of the Southwest Rapid Transit Corridor, planned buffered bike lanes that will provide safe access to services and shopping along Pembina Highway, residential areas in Maybank (especially those between Hudson and Pembina), and the Crescent Park and Wildwood neighbourhoods in East Fort Garry.

The addition of protected bike lanes can be accomplished with a minimal additional investment, and would allow for transit service and most parking to be retained. Transitions on and off of a protected bike lane are easily designed, meaning that no special provisions have to be made where improved bike facilities come to an end.

All travel lanes would be maintained, as is transit service and parking. Traffic signal phasing would have to be modified to remove conflict between eastbound bicycle traffic and southbound vehicle traffic.

Space is available to route people on bike between the sidewalk and on street parking. Note that the protected bicycle lane would be built at sidewalk level instead of at street as shown here. Use of vertical poles to differentiate the pedestrian and bicycle zones would minimize conflict between people walking along the sidewalk and people on bike.

At roadway intersections (e.g. Hudson), parking would be removed to provide for reduced crossing distances for pedestrians.

On the south side of Clarence, space limitations would require people on bikes to be routed onto a shared use pathway along with pedestrians.