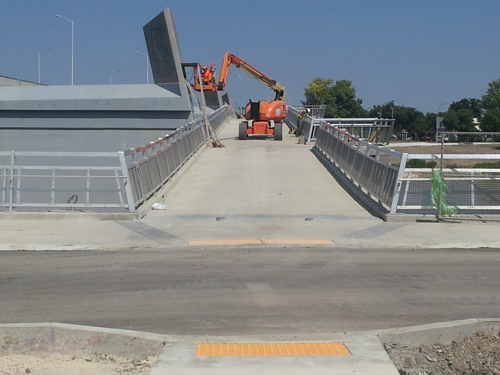 Was to open in July; now slated for mid-September

A long winter has delayed the construction of the Disraeli pedestrian bridge.

A civic spokeswoman confirmed that the opening date for the pedestrian bridge, formally known as the Disraeli Active Transportation bridge, was pushed back from the end of July to mid-September.

The change was the result of construction crews unable to resume work on the structure because of the long winter.

The pedestrian bridge was built upon the piers of the old Disraeli Bridge, whose road surface was demolished to make way for the new bridge.

The total cost of the two bridges and associated landscaping and road re-design is $191 million.

The city said the project is on budget. The Disraeli Bridge and overpass opened on schedule.

Once the new Disraeli Bridge and overpass were completed, crews began dismantling the road surface of the existing structures down to the concrete piers and then rebuilt a new bridge dedicated solely to non-motorized traffic.

The pedestrian bridge only spans the Red River.

Northbound drivers along the Disraeli Bridge have been getting a bird’s-eye view of the progress of the construction of the pedestrian bridge.

Most of the work appears complete. However, the spokeswoman said the remaining work to be completed includes the installation of lighting, railing and artwork on the bridge, as well as earthwork and landscaping on each riverbank.

In addition to artwork along the bridge, four lookouts were built into the design — one at each of the concrete river piers.