A pathway along the east side of Empress Street will be built in 2019 as part of the Empress Street and Overpass Reconstruction and Rehabilitation Project, extending from St. Matthews Avenue in the north south over the Empress Street Overpass to the North Assiniboine Parkway. Future plans call for the pathway to be extended north all the way to Saskatchewan Avenue, where it will connect to pathways along Saskatchewan Avenue and Sherwin Road to provide a connection to Red River College’s Notre Dame Campus.

What’s missing from the planning to date is a way to connect from this planned Empress Street pathway north to the Alexander-Pacific-Elgin Neigbhourhood Greenway and the Northwest Hydro Corridor Greenway, and northwest towards the Keewatin Street Pathway. Work to extend the Keewatin Pathway south to Gallagher Avenue is scheduled to take place in 2019 (see our recommendations and rationale to include a path on the east side of Keewatin along with the planned pathway on the west side of Keewatin). Work on the Northwest Hydro Corridor Greenway should begin in 2019 (although an extension across the CPR Mainline may need to wait for a rehabilitation of the McPhillips Street Underpass).

An All Ages & Abilities Connection from Empress St to Alexander Ave

An all ages and abilities connection from Empress St to Alexander Avenue is possible using a mix of neighbourhood greenways along low volume residential streets in the Weston Neighbourhood, pathways along Saksatchewan Ave, Midland St, and the BNSF rail line, and a short two way protected bike lane segment along Notre Dame Ave between Dublin Ave and Spruce St. If implemented, the route would provide users with safe crossings of Notre Dame Ave, Weston St., McPhillips St, and Logan Ave at existing traffic signals or pedestrian corridors. Assuming future plans to extend the Northwest Hydro Corridor will include a safe crossing of Logan Ave, only the Elgin @ Keewatin crossing would require crossing improvements (push-button activation for the pedestrian corridor for people on bikes). 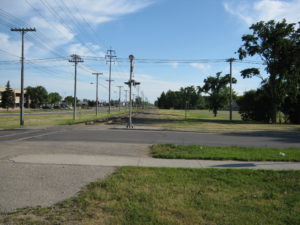 Looking south from Alexander Ave towards Notre Dame Ave, with Pascoe Park to the right. 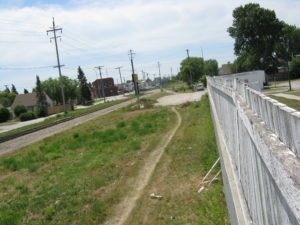 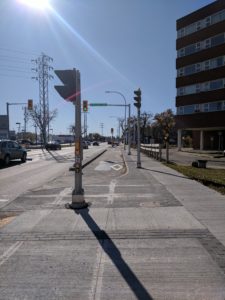 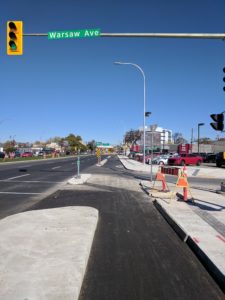 Include Connections to Alexander Ave in Planning for Empress St Pathway

We are asking that preliminary design of our proposed connections from the intersection of Empress St and Saskatchewan Ave to the intersection of Alexander Ave with Weston St, Lincoln and Pacific Avenues with Weston St, and improvements to the crossing of Keewatin St at Elgin Ave be added to the scope of the Preliminary Design Project for Rehabilitation of Empress Street between Saskatchewan Ave and St. Mathews Ave (set for 2023).

As there are no existing plans in the Pedestrian and Cycling Strategies for a crossing of the BNSF line to connect to planned Wellington Avenue Protected Bike Lanes (which serve as a spine in the bicycle network and connect through to Cumberland Avenue and the Downtown Protected Bike Lanes Network), we are also recommending that planning for the Empress St Pathway include a connection to the planned Clifton Neighbourhood Greenway via Notre Dame Ave and Spruce St.