MLA Dave Gaudreau is introducing a private members’ bill for second reading today in the legislature to define safe passing distance as one metre when passing a bicycle.

Bike Winnipeg sent him the following letter of support.  You can support him by sending email to stnorbert1@yourmanitoba.ca explaining why safe passing distance is important to you.

Bike Winnipeg strongly supports your private member’s bill that would require Manitoba motorists to allow a minimum of 1 metre when passing a bicycle.

It is critically important that motor vehicles pass people on bikes at a safe distance so that they are not struck and injured or killed when traveling for work and/or pleasure. This will be of immediate benefit to our existing membership, but its impact will be far wider.

We know from research conducted by the City, among others, that many Manitobans are afraid to ride their bicycle because they don’t feel safe on the roads with drivers passing so close to them. A change in behaviour of drivers resulting from your amendment could lead to an increase in the number of people choosing to ride their bikes for short trips, rather than driving their motor vehicles. This would have a positive impact on their health and their carbon footprint, helping the Province meet its health cost and environmental objectives.

Bike Winnipeg recommends that, once the law is passed, the government allocate sufficient funds to advertise and educate the public, while working with local jurisdictions to enforce the law, so that drivers quickly become aware of the law and drive accordingly. The passage of this law would play an important role in helping motorists understand what is expected of them when they operate their vehicles around people on bikes. 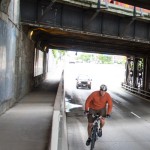