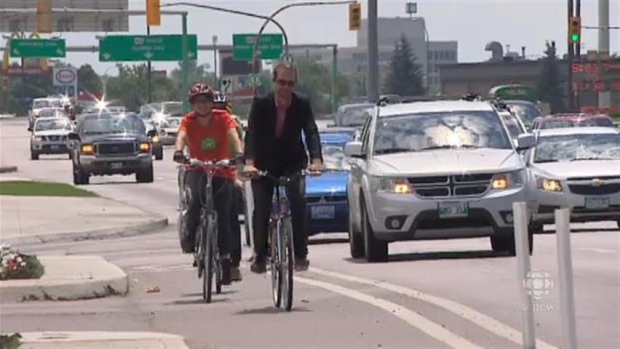 The City of Winnipeg will be rehabilitating a segment of Pembina Highway between Confusion Corner and Grant Avenue in the coming years, which will allow for the addition of buffered bike lanes along with the rehabilitation of travel lanes and sidewalks. We see this as a positive step that will benefit all users of Pembina Highway, especially those of us who ride (or would like to ride) our bikes on Pembina.

It is important that plans for this rehabilitation project include cycling infrastructure that connects with existing as well as the planned cycling facilities such as:

Existing and Planned bicycle movements that need to be accommodated as part of Pembina Highway Rehabilitation plans.

Please Attend the Open House to Discuss Options for Pembina

Winnipeggers are invited to an open house to view the proposed design for the rehabilitation of Pembina Highway from Osborne Street to Grant Avenue. There will be an opportunity to ask questions and provide feedback.

For more information, or if you are unable to attend the open house and would like to provide feedback, you can visit the project wesbite at www.winnipeg.ca/PembinaRehab. You can review the presentation boards here.

After reviewing the plans that will be presented at the Open House for this project on April 21st, Bike Winnipeg has come up with the following recommendations to improve these draft plans.

We are concerned that the plans to eliminate the crossing of Pembina on the separator island eliminate a useful connection between destinations north of Corydon and South Osborne.

Currently, a person biking from north of Corydon headed towards south Osborne has the ability to approach Pembina on Corydon and cross Pembina within one traffic signal phase so that they can reach the corner of Pembina & Osborne in time to turn right when the signal at Pembina and Osborne turns green for southbound traffic crossing Osborne. This creates a good lead time for a person biking south through the Osborne Underpass as southbound traffic on Osborne will be stopped at a red light.

Removing the pedestrian crossing from the separator island between Corydon and Osborne removes an important bicycle connection to the Osborne Underpass.

Similarly, anyone who is trying to connect to the pathway along the south side of Donald will have to wait for traffic on Osborne to stop before reaching the two way cycle track along the south of Corydon that parallels the transitway, resulting in a significant delays and a reduced level of service.

Recommendation #2 – Develop a Connection to McMillan

Winnipeg’s Pedestrian & Cycling Strategies identify McMillan Avenue as a future neighbourhood greenway on the north side of Corydon connected to confusion corner via a pathway through the River-Osborne Community Centre site. 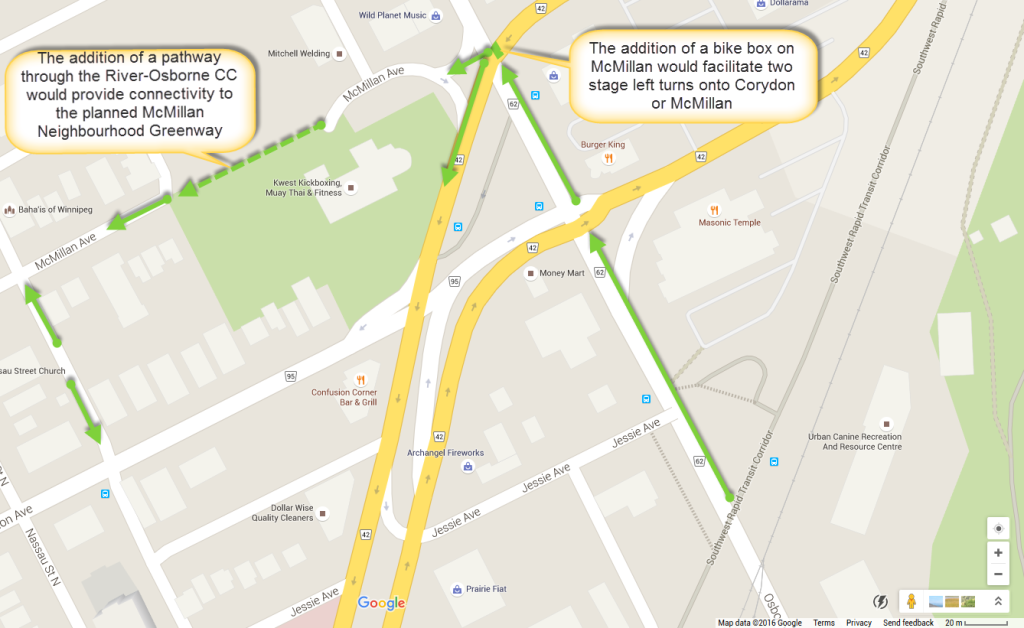 A bike box at McMillan and Osborne combined with a pathway through the River Osborne CC site would help connect the McMillan neighbourhood to South Osborn.

While we agree with the decision to route the bike lane behind the bus stops, we feel that a number of improvements could be made to the design to improve separation between people biking on Pembina and those getting on or off of buses.

We would like to see design modifications to improve separation between people biking on Pembina and those using transit.

In particular, we would prefer to see the bike lane by-passes around the bus stops kept at street level (or midway between street level and sidewalk level) as is done on Sherbrook Street. This will increase the differentiation between pedestrian and bicycle areas behind the bus stop.A sidewalk connection to the bus platform can be raised. Additionally,poles with hanging planters could be used to help define boundaries of the bus platforms, and would provide aesthetic benefits as well.

See the examples below, taken from the Massachusetts Planning & Design Guide for Separated Bike Lanes. 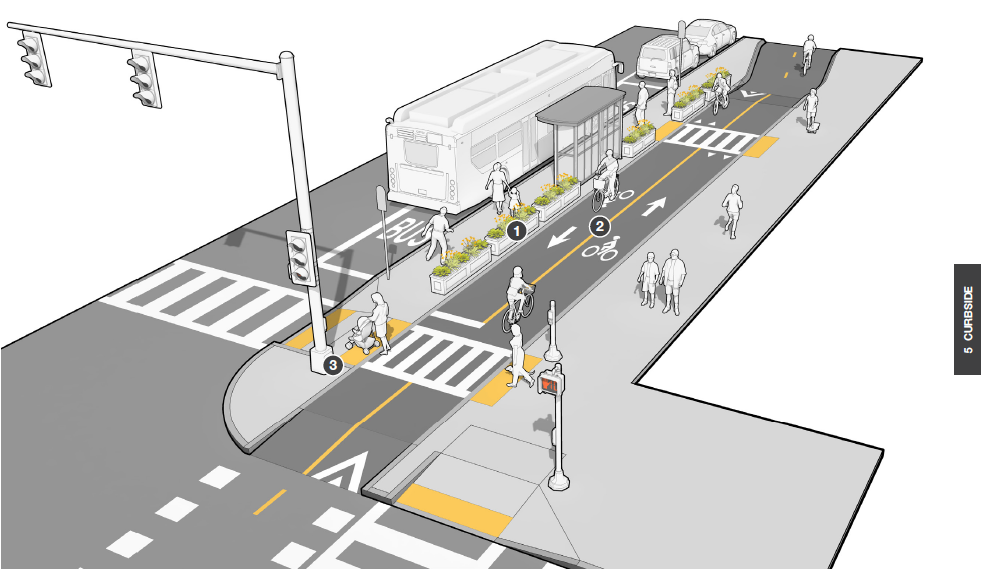 Conflict between people using transit and those riding their bikes can be minimized through better differentiation of the bike and pedestrian zones.

We’d like to see a left turn storage bay installed on the east side of Pembina to help facilitate two stage left turns off of Pembina onto Daly at the existing half-signal pedestrian crossing. 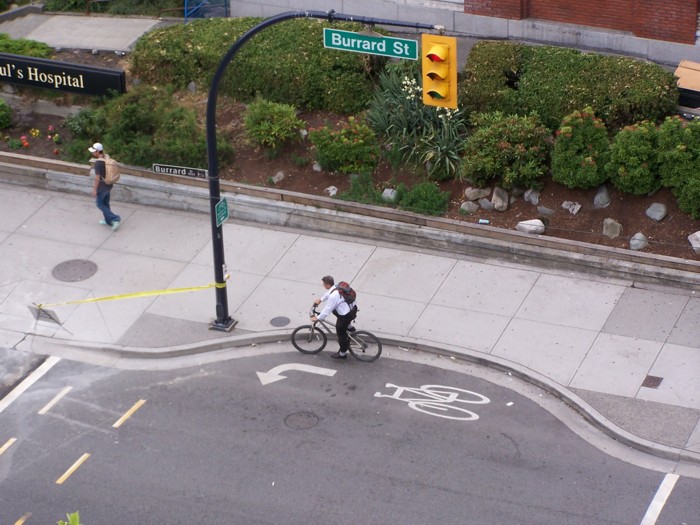 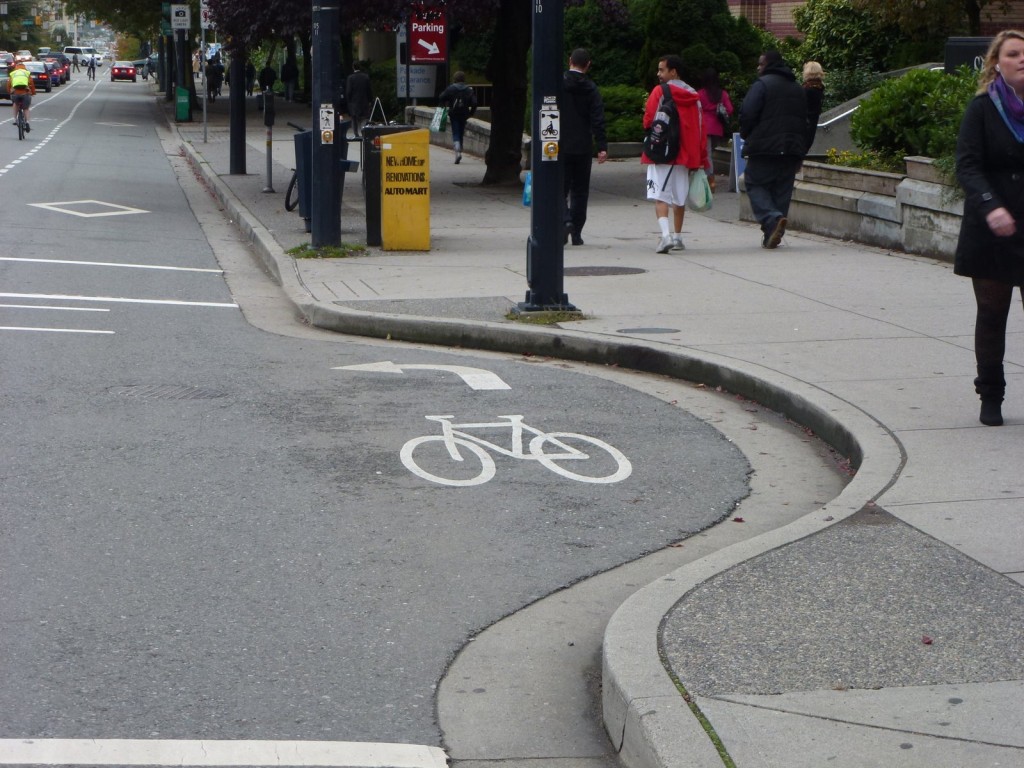 Another view of the storage space provided to people on bikes making a left turn off of Burrard Street in Vancouver. 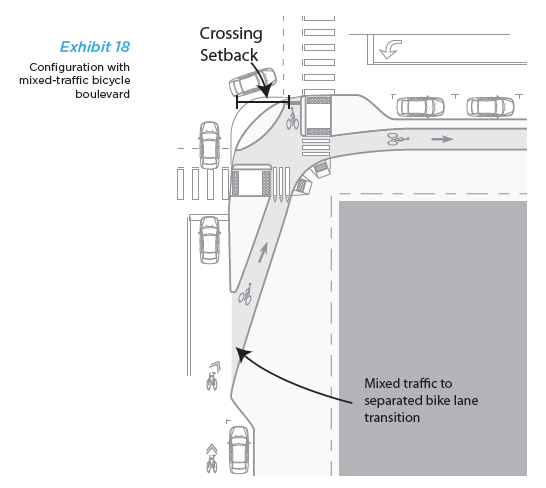 We are concerned that the wide radius on the merge lane from Pembina onto Grant presents a right hook threat to people on bikes, and would like to see the turning radius tightened up to reduce the speed of turning vehicles. Ideally, we would like to see something similar to a protected intersection treatment used here, where the buffered bike lane is bent out from Pembina before crossing the Grant Avenue merge lane at a right angle. This would force vehicles to slow down before crossing the bike lane and crosswalk, providing much better sight lines for all users of the intersection and would improve overall safety. 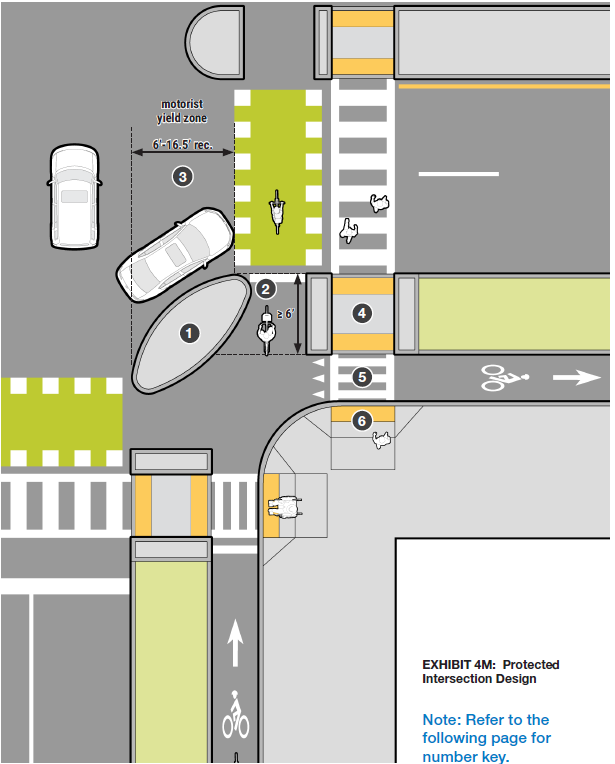 A modified protected intersection treatment should be applied at the Grant intersection to improve comfort levels for people on foot or bike and reduce the risk of right hook collisions. 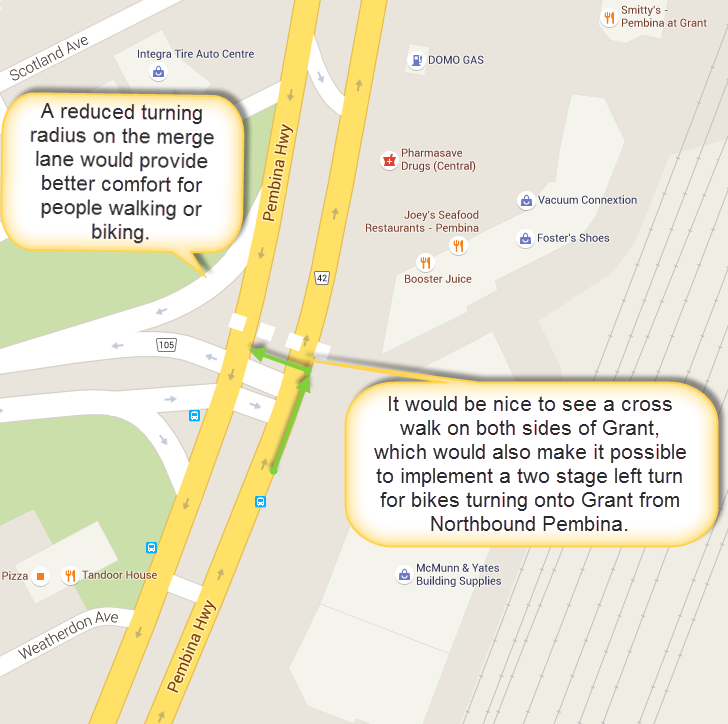 To accommodate left turns off of Pembina onto Grant, a crosswalk and bike crossing should be added to the north side of Grant Avenue.

We feel that lane widths on Pembina can be reduced to allow for a wider bike lane. See Theo Zeegers research document that underlies the CROW and MASSDOT Separated Bike Lanes Planning & Design Guidelines.

Travel lanes widths could be reduced to provide recommended widths for people on bike.

Narrower travel lanes could be used – there is plenty of guidance in support of narrower lanes.

To improve both walking and biking conditions along Pembina, a reduction in the number of access points (or at least measures to shorten the crossing distance at access points), should be considered. For example, access to Garwood might be removed (or made one way) in favour of access from Daly). 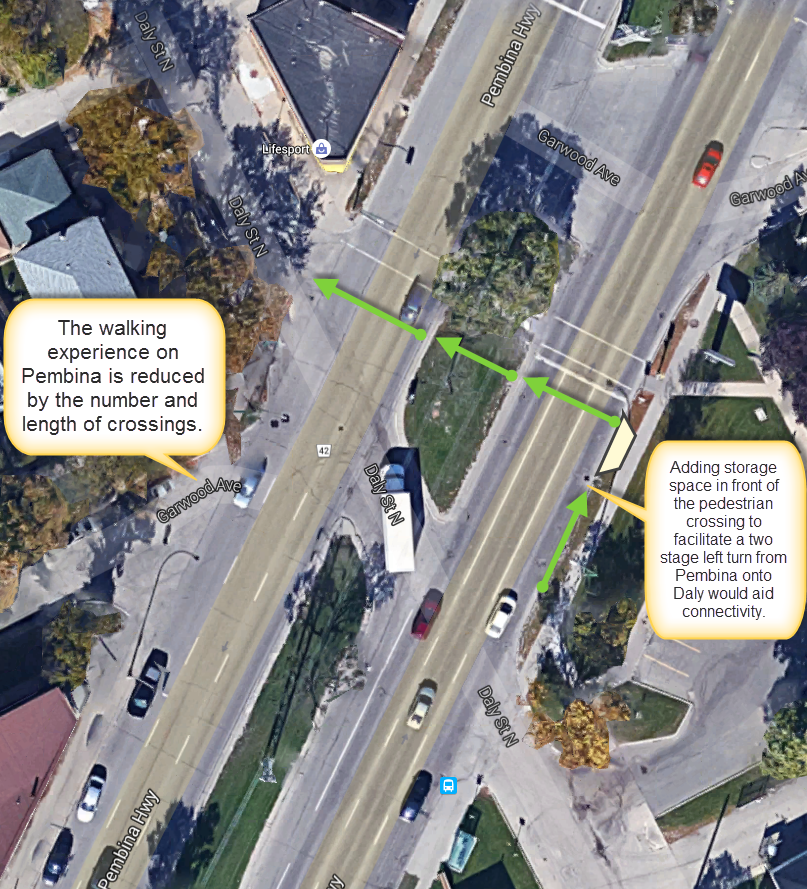 Consolidating access points on Pembina (or at least restricting their width) would increase the comfort level of people walking or biking on Pembina.

The skewed angle of Garwood in the image shown above is a good example of an excessively long crossing distance for people walking or biking along Pembina. Where access points are closed or narrowed, planters could be added to improve aesthetics along Pembina.

Do we really need two way access to Garwood and Daly from Pembina?

As the current access to Osborne Station from the east side of Osborne is via sidewalk from Corydon or through the Masonic Lodge parking lot, it would be good to see a pathway connection from the Osborne Station to the Southwest Rapid Transit Corridor AT path included as part of this project.

As shown below, there should be enough space between the transitway and parking lot to provide this connection, which would reduce conflict between people on bike and foot. 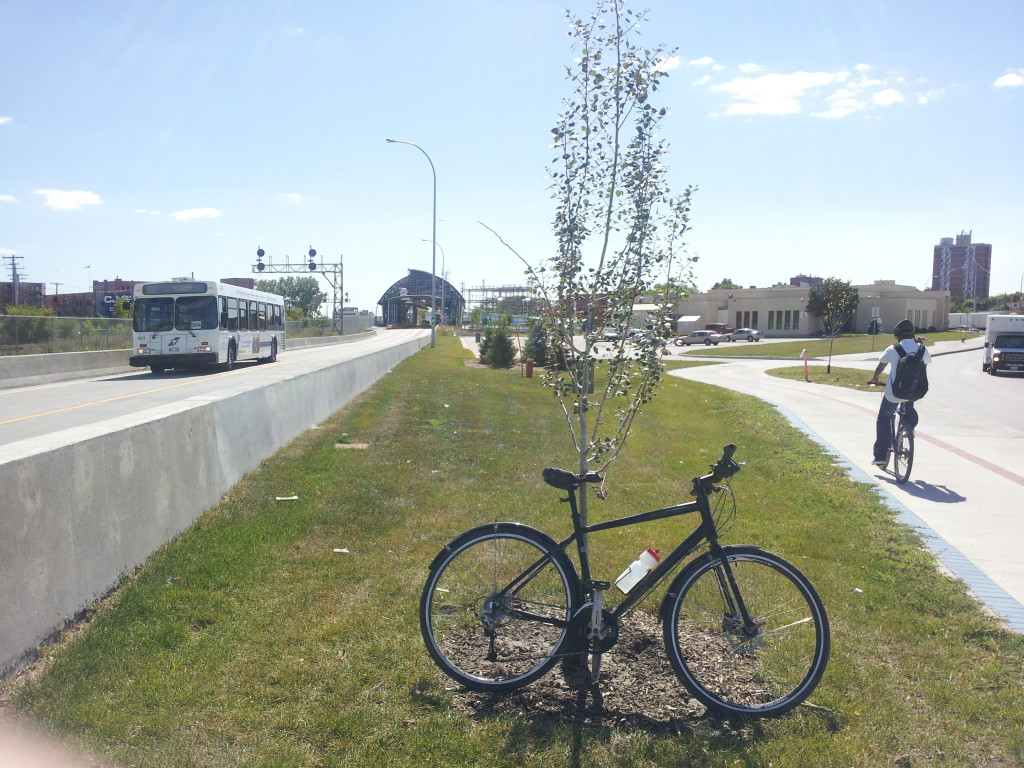 A direct connection from the Southwest Rapid Transit Corridor AT path to Osborne Station would reduce conflict between people walking/biking in front of the Masonic Temple. 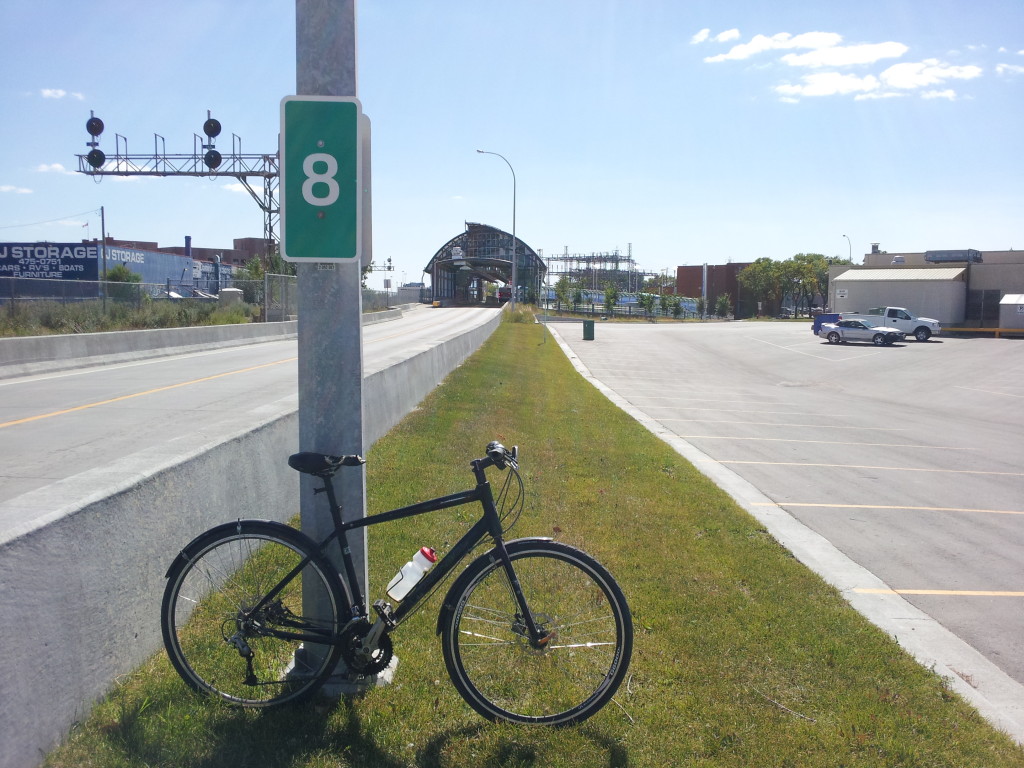