Riding on federal coattails has to stop 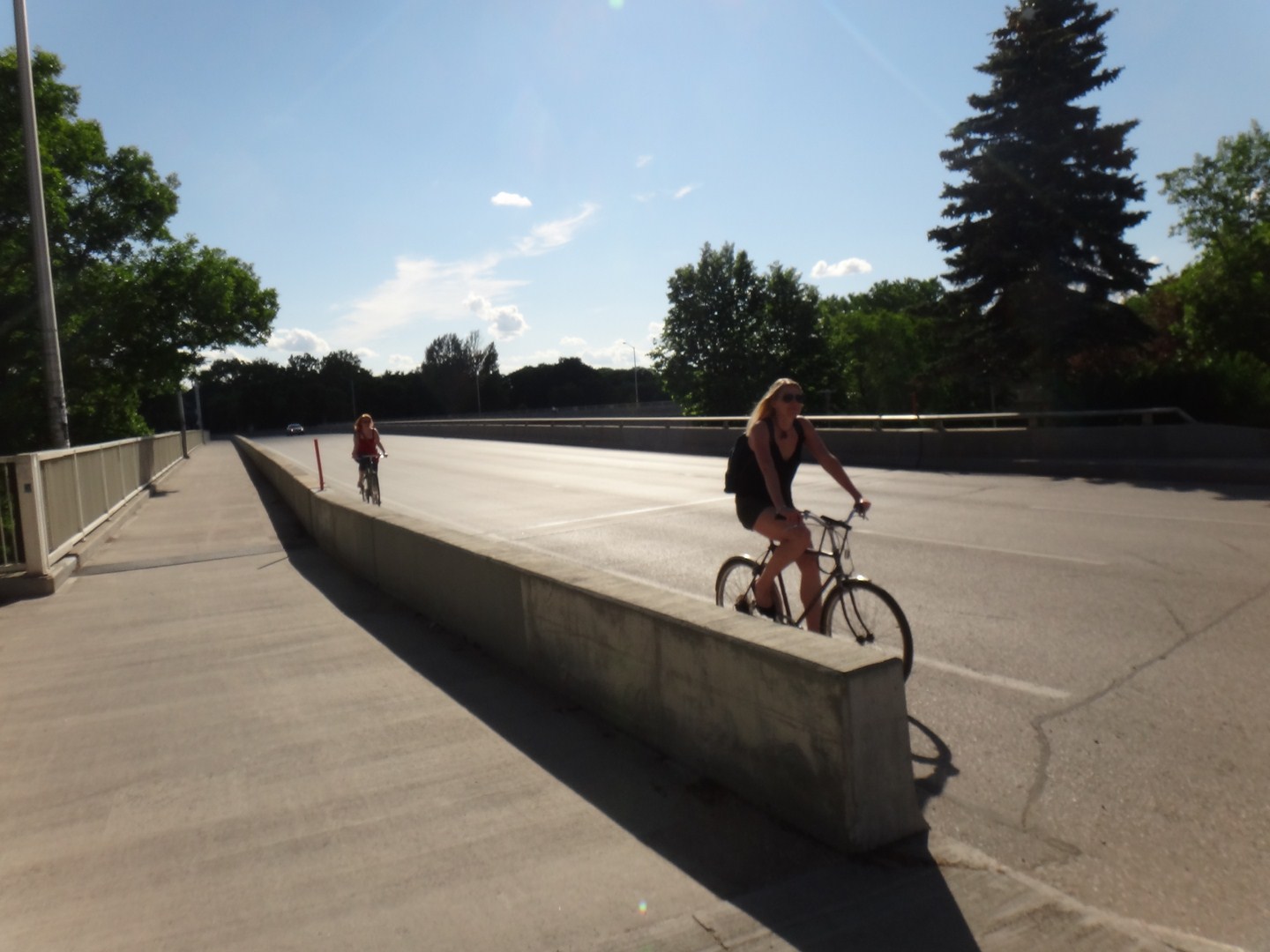 Winnipeg cyclists, like Winnipeggers in general, can sometimes be too negative about their city. They feel Winnipeg is falling behind other parts of Canada, let alone other countries, in the worldwide movement to promote cycling and all forms of human-powered transportation.

It turns out, however, we haven’t been waiting for the perfect conditions or government programs to start changing, as I found out when I looked at recently released statistics. Surprisingly, Winnipeg is leading the Prairies in commuting by bicycle and is one of the leading cycling cities in Canada.

Third in Canada in Commuter Cyclists 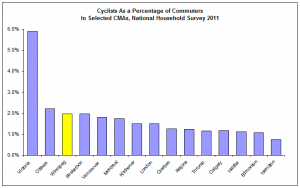 Winnipeg has the 3rd highest rate of commuter cycling in Canada

Data from the National Household Survey reveal Winnipeg is among the leaders in Canada in the percentage who travel to work by bicycle. Among census metropolitan areas (CMAs) Winnipeg ranks third behind Victoria (5.9 per cent) and Ottawa (2.2 per cent), and is tied with Saskatoon at 2.0 per cent. 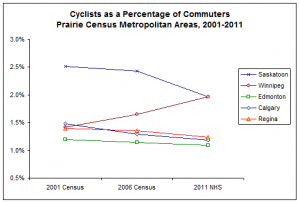 Commuter cycling in Winnipeg grew steadily between 2001 and 2011.

In fact, most cities across Canada have seen declines in the cycling percentage. Cycling rates have been increasing in Victoria, Ottawa, Montreal, Toronto and Halifax, but not as quickly as in Winnipeg. Between 2006 and 2001, the rate of commuter cycling in Winnipeg increased by 19.6 per cent, faster than in any other metropolitan area in Canada. 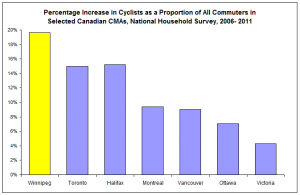 Commuter cycling in Winnipeg has grown faster than in other major Canadian city between 2001 and 2011.

Working Together: The Winnipeg Advantage

Why is cycling increasing so quickly in Winnipeg? The year 2006 marked a critical turning point in Winnipeg’s awareness of the issues facing cyclists. A Critical Mass ride that year resulted in confrontations and arrests. Rather than this turning into ongoing confrontations, cyclists organized a forum dubbed “Bike to the Future,” at which issues were aired and constructive solutions were sought. This led to the formation of a cycling advocacy organization, along with many other developments, ranging from lobbying city and provincial electoral candidates and the creation of Bike to Work Day, to the use of federal stimulus funding to build new bike paths.

There have been many other developments, such as the emergence of volunteer-run bicycle repair shops, efforts by Bike Winnipeg and MPI to educate cyclists and drivers, celebration of cycling through events like Ciclovia, and the creation of Bicycle Valet Winnipeg, providing free bicycle parking at Bombers games and other events.

These developments cannot be credited to a single organization or initiative — that is their strength. As is typical of Winnipeg, many individuals and organizations have come together to improve our city. Cyclists continue to be frustrated by lack of bike lanes and continued dominance of a car-centric mindset. There has also been controversy about some of the new infrastructure designed for cyclists, but with time it has become clear many of these projects have won the support of cyclists, residents and others.

The Future of Cycling in Winnipeg and Manitoba

The number of commuters cycling continues to grow. Bicycle counts done by Bike Winnipeg show a 28 per cent increase in commuter cyclists since 2007, and a 12 per cent since last year alone. “Winterpeg” is now a leader in the growth of cycling in Canada. In fact, because of the active cycling community and developments here, Winnipeg has been chosen to be the site of the second International Winter Cycling Conference next February. The excuse that “it’s too cold to cycle in Winnipeg” is no longer valid.

But what have the City of Winnipeg or the Province of Manitoba done to recognize and capitalize on this grassroots development? Given the benefits of cycling to our health, our infrastructure costs, tourism, retail businesses and our environment it is unfortunate the city and the province have not done more.

Since 2010, when Winnipeg was able to take advantage of the federal infrastructure stimulus program, little has been done by local governments to improve and encourage cycling. While we can celebrate Winnipeg’s community spirit in moving cycling forward, we would like government to be partners in this movement, rather than sitting on the sidelines.