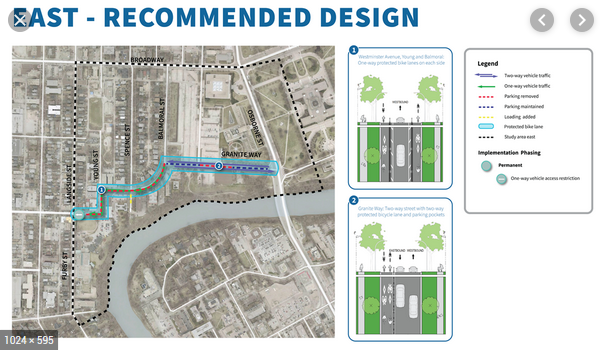 The City has published a “recommended design” for the Wolseley to Downtown Walk/Bike Project, and is seeking public input through an  online survey (open until Feb. 9) and an open house January 29th 6 p.m. – 8 p.m. at the Westminster United Church (745 Westminster Ave).

This is an important project for cyclists and pedestrians, please be sure to look at the plans and express your opinion.

The City will be particularly interested in hearing from people who live near the area. Many businesses and residents with other priorities have been expressing their interests.

Some of the benefits we anticipate that a safer, more comfortable, better connected bike network in Wolseley and West Broadway would bring:

Bike Winnipeg supports the City’s direction on this project, but we see room for improvement. Please review the comments we have put together below and talk to the City about any of these ideas that make sense to you. Feel free to tell us about any other changes you recommend.

This is a critical region for people cycling in the city, as it has the potential to provide safe, convenient connections north/south across the Assiniboine River and east/west from Omand’s Creek and the Polo Park area through to the Downtown. Within the city’s proposed bicycle network, the routes along Wolesley and Westminster/Young/Balmoral/Granite Way are the only east/west connection north of the Assinboine River that connects these areas.

There are no plans to provide safe cycling spaces on Broadway or Portage, and no timeline to upgrade the one sad east/west connection on St. Matthews that consists of substandard painted bike lanes inexplicably alternating with utterly useless sharrows that force people on bike to share the lane with everything else on the road. Failure to improve conditions for people walking or cycling along these few routes means a failure to provide any safe way to travel within or through a central part of the city by any means other than car.

Removing these routes from the planned bike network (or providing substandard facilities that remove them for all but the most confident cyclists) effectively kills any chance at attaining a bike network that accommodates people of all ages and abilities in the city.

We encourage the city and stakeholders to work together to minimize any loss of parking and loading. Parking/Loading bays similar to those installed along Harrow St and Sherbrook St. could be added along areas of Westminster/Balmoral in areas of high demand. We would want to work with designers to ensure that any such design supported safe interaction between vehicles and people on bike or loading on/out of vehicles, and that the planned design supported year round usage.

Similarly, we are open to modifications that keep two way traffic flow in place as long as two one-way protected bike lanes at least 2.1m of usable bike lane in each direction (plus buffer between the bike lane and the travel lane). This would require removal of trees to accommodate a widening of the roadway and would significantly increase the cost of the project. The community would clearly need to show their willingness to remove trees and boulevard space to make this happen. Increased costs would need to be found in the city’s Road Renewals budget without affecting future budgets for walking and cycling improvements.

The safety and well-being of the thousands of people who will benefit from a safer, more comfortable, better connected cycling network need to be at the center of plans for the Wolesley and Westminster/Young/Balmoral/Granite Way corridors.