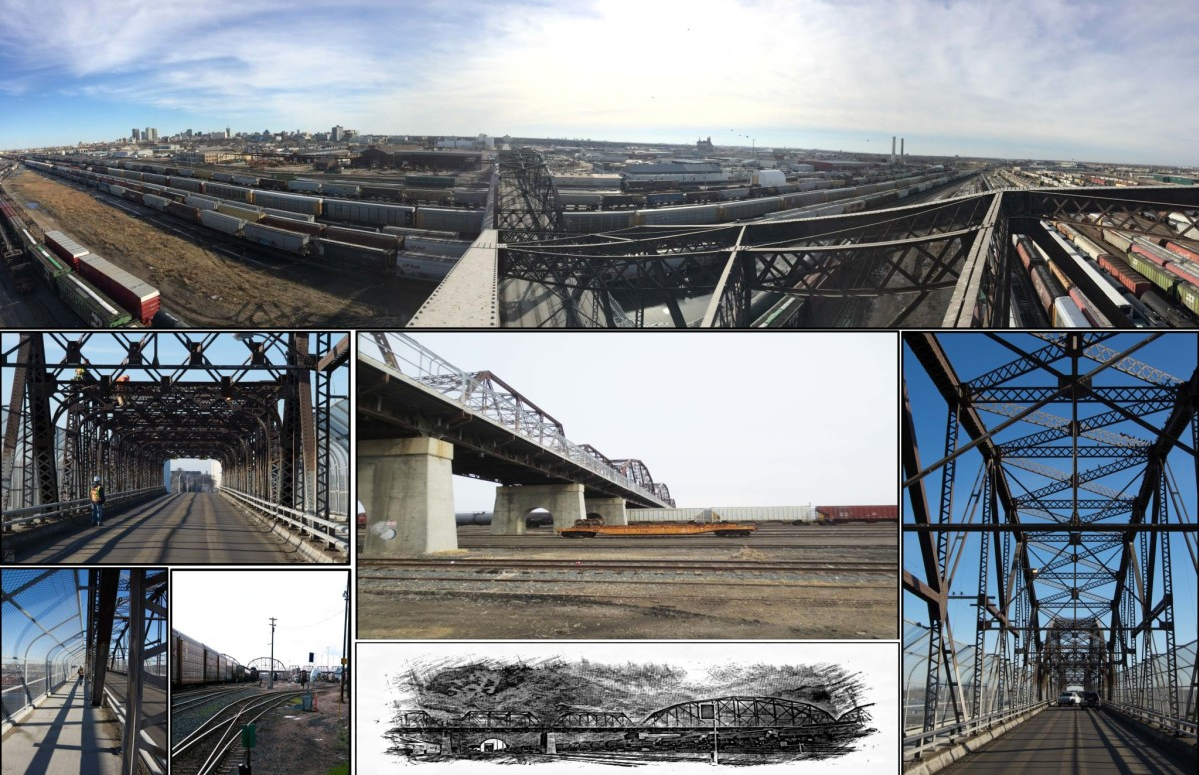 Draft plans have been developed, with multiple options for reconstruction of the Arlington Street Bridge to be started in 2020 and two options for a second new or upgraded crossing of the yards to be completed by 2035. Those plans can be viewed here, including a map showing how the proposed changes fit in with the City of Winnipeg’s planned bicycle network.

Arlington Bridge to See Significant Improvements that Can be Built Upon

We are very pleased to see the commitment to include protected bike lanes across the bridge and extending north to Burrows Avenue and South to McDermot Avenue. We firmly believe that protected bike lanes on Arlington can be extended all the way from Portage Avenue to Inkster Boulevard. An added benefit of a new Arlington Bridge over the yards will be reduced slopes on the ramps leading to the bridge. The current grades of seven to eight percent would be reduced to to under five percent to meet accessibility requirements. That should make it far easier to pedal up the bridge, although it will still be a bit of a workout. 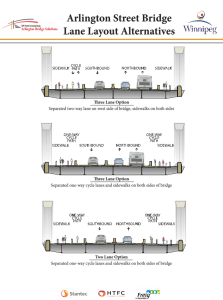 Our preference would be for two one way protected bike lanes vs. the two way bike path as this would allow for easiest transition on and off of the bridge to one way protected bike lanes on Arlington Street. Option 3 with the wider bike lanes being considered for the one way bike lane option would be our preference, but option 2 with the narrower lanes would be acceptable as long as the delineation between the walking and biking sections of the bridge allowed them to be swept and cleared of snow easily. That would generally mean that the barrier between the sidewalk and bike lane would be visual and tactile rather than some kind of raised barrier.

Intersection Of Arlington & Logan Needs to be Designed Carefully 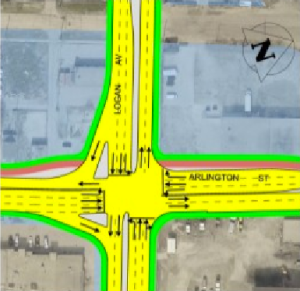 Intersections will have to be designed carefully to ensure that all users are safe.

Merge lanes such as those shown on the plans for the intersection of Arlington and Logan can be a safety risk for people on bike or on  foot. Care will have to be taken in the detailed design of this intersection to ensure that people driving cars and trucks are forced to slow down before merging onto Arlington, and to be sure that sight lines are good for all people who will use the intersection. The use of stop signs would greatly increase safety at this intersection.

Of note is that Option B, which is to build a tunnel connecting Sherbrook Street to McGregor Street, lacks any access for people on foot or bike.Pedestrians and cyclists would be prohibited from the tunnel.

Option B, which calls for the construction of a tunnel between Sherbrook Street and McGregor Street will provide no improvements for people on bike or on foot.

For that reason, we find that this option is unacceptable. We cannot support this option.

Option A, our preferred option, calls for a widening of the McPhillips Street Underpass, including a separated bike path on the east side of the underpass that would provide a safe connection under the tracks at the southern end of the proposed Northwest Hydro Corridor Greenway. This could be a very important connection in Winnipeg’s bicycle network, particularly for people living in the Northwest corner of the city.

Connectivity Issues Need to be Addressed

Our main concer with this option is that there is no plan to provide a direct, comfortable connection between the southern end of the planned Northwest Hydro Corridor Greenway and the protected bike lanes planned along Empress Street. 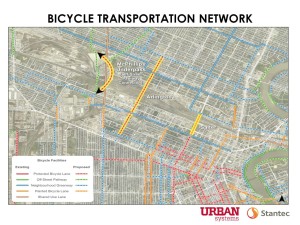 The bike network shown at the open houses shows a definite improvement for people biking on Arlington, but lacks reasonable connectivity between the Northwest Hydro Corridor Greenway and the protected bike lanes planned for Empress Street.

The recently passed City of Winnipeg Cycling Strategy clearly states that the establishment of direct, comfortable bicycle routes that connect to key destinations will be a critical step towards enabling more people to make trips by bicycle. We need to stick to those principals, but if we rely on planned diamond lanes and bike lanes on McPhillips connecting across Notre Dame to a future neighbourhood greenway along Banning (or on an unlikely detour to the far west along Sherwin road), we will likely fail to realize a connection suitable for anyone other than the most confident or motivated cyclists. In particular, a restricted right of way along McPhillips and a critical turning movement off of southbound McPhillips onto eastbound Notre Dame make it unlikely that there will ever be the type of low stress cycling infrastructure on McPhillips linking the Northwest Hydro Corridor Greenway to Banning.

Fortunately, there is a practical way to create the connections we desire if we are willing to make a few small changes to the planned bicycle network. 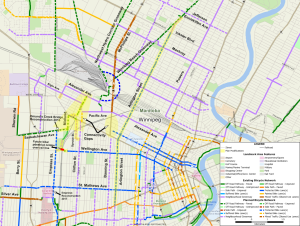 Bike Winnipeg recommends that the city alter the planned bike network by adding in a connection between Alexander Avenue and the intersection of Saskatchewan Avenue and Empress Street along a route defined as follows:

Arlington Street, with protected bike lanes running from Portage Avenue to Inkster Boulevard, should replace Banning/McPhillips as a spine in the bicycle network (Ruby/Banning should remain on the map as a planned neighbourhood greenway)

We further recommend that the protected bike lanes on Notre Dame be extended to the eastern exit/entrance to the Thrift Lodge parking lot before being taken off road between there and the intersection of Spruce Street with Notre Dame creating an additional connection to Clifton Street via Richard Ave.

Our final recommendation is that the city add a grade separated crossing of the CPR La Riviere/BNSF rail line extending from the West view Park Hill to the Wellington Avenue right of way to provide a safe connection over the tracks, as crossing the tracks at this location is currently prohibited. 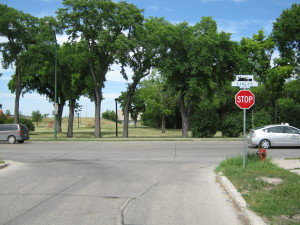 Looking north into Stanley Knowles Park from the intersection of Winks and Logan. A half signal could be located here to provide safe access across Logan Avenue. 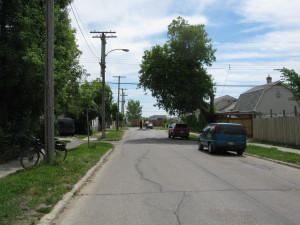 Looking south down Winks towards the intersection of Alexander and Winks (at the traffic circle). A trail connects the southern end of Winks through the Public Works yards to Pacific.

Alexander Avenue provides a traffic signal controlled crossing of Weston on a lower volume residential street that is already part of the city’s bicycle network that would provide the link between Winks and the rail with trail pathway we are proposing for the west side of the CPR La Riviere/BNSF rail line. 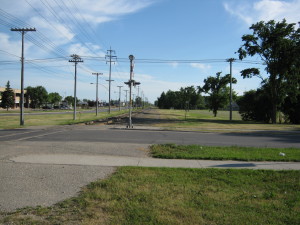 Looking south towards Notre Dame along the western right of way for the CPR La Riviere/BNSF rail line from the northwest corner of its intersection with Alexander. Pascoe Park is seen to the right (west). There is ample room for a rail with trail pathway along this stretch 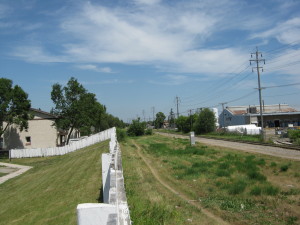 The existing traffic signal at Flint & Notre Dame provides a safe crossing of Notre Dame, but once across Notre Dame protected bike lanes will also need to be provided to complete the link to Midland Street (and ultimately to Empress Street) to the northwest, and to Spruce Street (and ultimately Clifton Street) to the southeast. Southbound Notre Dame is serviced by two lanes north of the Dublin/Midland Intersection, adding a third southbound lane at the intersection. While the third lane may be necessary to manage capacity leading up to and south of Weston, this third lane could be converted into a two way protected bike lane between Midland Street and the easternmost Thrift Lodge parking lot entrance/exit without sacrificing significant traffic capacity or level of service. South of the Thrift Lodge parking lot entrance/exit, minimal property acquisition would make it possible to route the protected bike lanes off of Notre Dame onto the boulevard before ending at Spruce Street.

Traffic signals could be used to control access across the protected bike lanes on the merge lane off of Midland onto Notre Dame (and vice versa). 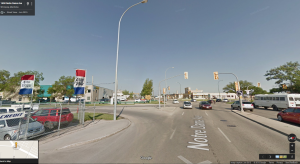 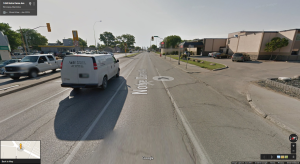 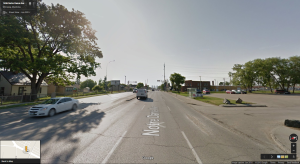 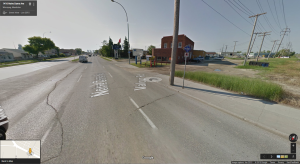 Wide boulevards on Midland Street would allow for multiple options for the provision of protected bike lanes between Notre Dame and Saskatchewan Avenues. Access across and on and off of the lanes could be controlled by traffic signals at the Notre Dame/Midland/Dublin intersection. 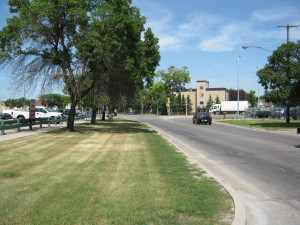 Looking north along the western side of Midland towards the intersection with Notre Dame/Dublin. Wide boulevards on Midland provide many options for protected bike lanes to provide a connection between Notre Dame and Saskatchewan. 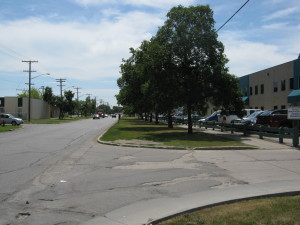 Looking south down the west side of Midland just south of Notre Dame and Dublin. 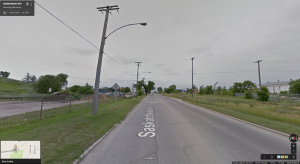 Requirements for Heavy Truck Traffic, utilities, and proximity to rail lines may make the connection from Empress to Midland along Saskatchewan tough, but it should be possible to find a solution here as well. 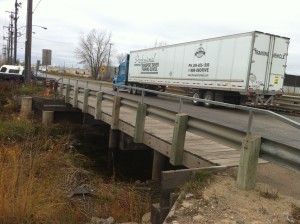 The design team wants to know what this project means to you, your family, community and city. Please try and drop in to one of the two open houses and share your ideas about the two proposed options.

For more information, visit cprcrossing.winnipeg.ca, click on the citizen planner button at the top right corner and share your thoughts!