Local Priorities for Walking and Biking

The Egerton-Youville-Enfield-St. Jean Baptiste Neighbourhood Greenway would provide Winnipeg with a low stress north/south bike route through the neighbourhoods of Glenwood, Norwood East, Central St. Boniface, and North St. Boniface. Major destinations that would be provided with a connection into the bike network by the Egerton-Youville-Enfield-St. Jean Baptiste Neighbourhood Greenway include: In the absence of cycling facilities along St. Anne’s Rd or Des Meurons St, the Egerton-Youville-Enfield-St. Jean Baptiste Neighbourhood Greenway can act as an alternative north/south route. The route is almost as direct as Des Meurons (riders on this route should experience less than a minute or two in extra riding time as compared with the Des Meurons route.), and can’t be beaten for its aesthetics. 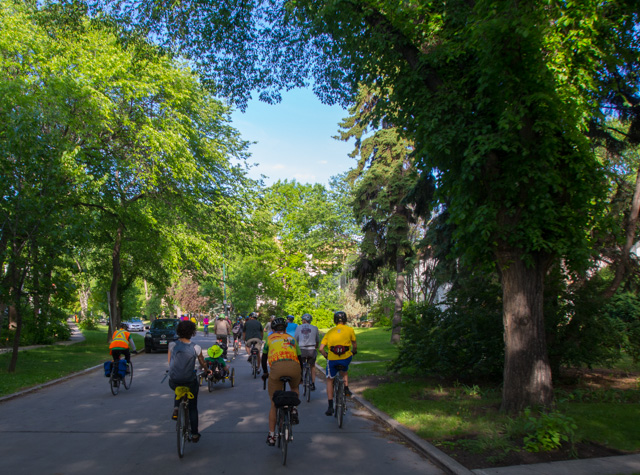 The Egerton-Youville-Enfield-St-Jean-Baptiste Neighbourhood Greenway will provide Winnipeg with a much needed low stress bike route through neighbourhoods in St. Boniface and St. Vital along some of the city’s most scenic streets.

The 2017 Southeast Corridor study produced a recommended design for the Egerton-Youville-Enfield-St. Jean Baptiste Neighbourhood Greenway, but there is currently no funding in place to follow through with implementation of the recommended design.

The Trasncona Trail was one of the biggest projects included in the 2010 Federal Stimulus Fund Package. It runs 6.7km from the Perimeter Highway across the northern limit of Transcona before veering southwest to follow the CEMR rail line to Regent Ave, where it ends.

This leaves people with the choice of continuing their ride along Regent Ave and its six plus lanes of traffic, or turning around and heading back to wherever they cam from. Not many choose to continue down Regent Ave. The lack of any safe, direct connection between the southern end of the Transcona Trail and St. Boniface is one of the biggest barriers to cycling in the city.

Thankfully, plans are in the works to close this gap in the city’s bike network.

Plans to extend the Transcona Trail south across Regent Ave to Panet Rd will make a huge difference for people biking into or out of Transcona while providing much needed access to shopping within Transcona.

This project was approved for multiple year funding in the 2017 Pedestrian and Cycling Program of the Capital Budget. A preliminary study was completed in 2016 and more detailed design work is taking place throughout 2017, which includes land negotiations.

In the meantime, the most likely connection from Panet Road to the Downtown is via Mission St and Notre Dame St to Tache Ave and the Esplanade Riel Walk/Bike Bridge into The Forks. To facilitate the connection to MIssion St, we are recommending that the city include a pathway connection from the planned western terminus of the pathway at Panet Road to Mission St. The city has an easement for a pathway along the eastern side of Panet Road for just this purpose, so an extension of the pathway south to Mission St should be a fairly simple addition to any construction contract.