The North Winnipeg Parkway links Kildonan Park and the Chief Peguis Trail pathways to St; Juhn’s Park, beneath the Harry Lazarenko (Redwood) Bridge, through Michaëlle Jean Park to Rover and Annabella where it connects with the pathway along Waterfront Drive.

Numerous sections of the existing pathway are substandard, especially between Michaëlle Jean Park and St. John’s Park, and should be upgraded. A $400,000 study to look into options for its improvement is currently scheduled for 2019. 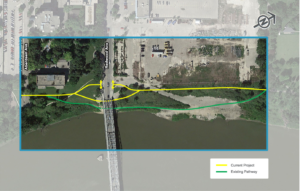 A raised pathway beneath the Harry Lazarenko (Redwood) Bridge is planned to fill a critical gap in the North Winnipeg Parkway, but it’s completion has been stalled by the absence of a needed property easement.

As this is a critical link in Winnipeg’s cycling network, we feel that the city will have to look at expropriation if it cannot come to terms with the property owners for an easement that would allow for the needed improvements.