The Northwest Hydro Corridor Greenway would build separated bicycle and pedestrians pathways along a hydro right of way that runs parallel to McPhillips Street from just north of the McPhilips Street Casino, passing by Seven Oaks Hospital before  continuing beyond the Perimeter Highway. From McPhillips Street Station, the Greenway would include a grade separated crossing of the CPR Yards and CPR La Rivierre rail lines leading to a trail through Stanley Knowles Park to tie in with the Alexander Bikeway via Winks. 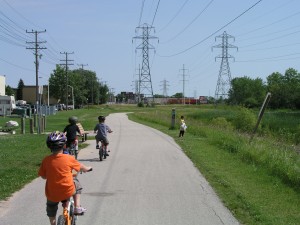