WHAT ARE WINNIPEG’S WHEEL WORRIES AND WOES? 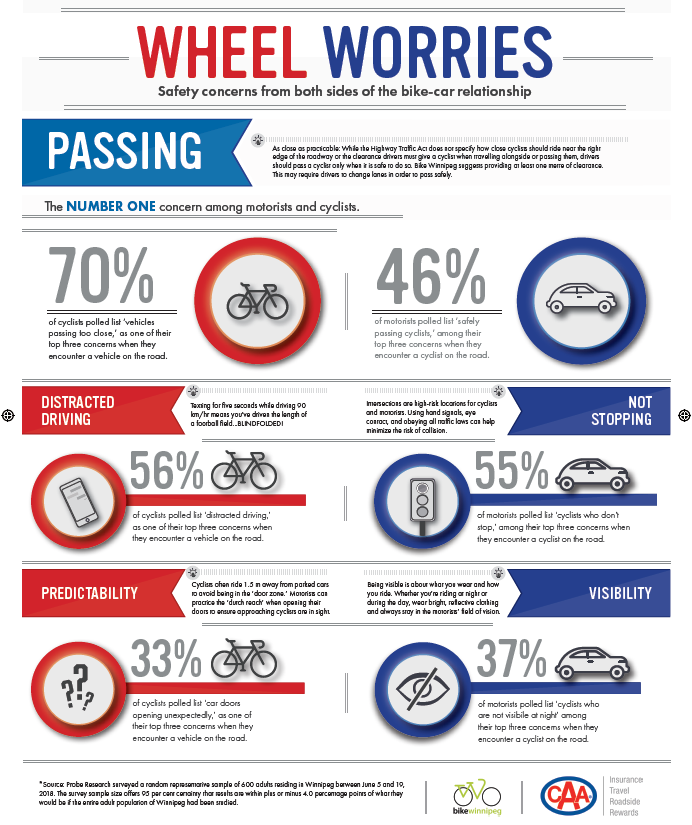 Part two of three-part series drills into the top safety concerns
from both sides of the bike-car relationship.

WINNIPEG, August 8, 2018 – Keeping a safe distance from one another is the top safety concern for cyclists and drivers alike, according to a Probe Research study conducted for CAA Manitoba and Bike Winnipeg. This, along with a host of other concerns, helps explain why bike-car interactions on shared roadways are often wrought with angst.

“We know that more separated bike lanes in Winnipeg is the top physical change that would help turn some from a casual cyclist to a regular one,” said Mark Cohoe, Executive Director of Bike Winnipeg. “It’s no surprise that when cars and bikes are forced to share one lane, both may feel unsafe. It’s more evidence that a continued focus on building separated lanes is the best plan for Winnipeg.” 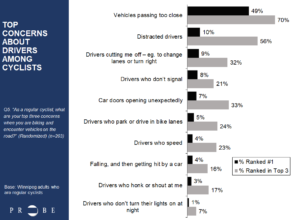 70 percent of cyclists polled list “vehicles passing too close” as one of their top 3 concerns when they encounter a vehicle on the road.

Of all the safety concerns highlighted, 46 percent of drivers and 70 per cent of cyclists put passing safely in their top three. Drivers said cyclists who don’t obey stop signs was their next concern, while cyclists called out distracted drivers as theirs. 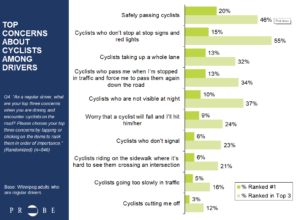 46% of motorists polled list “safely passing cyclists” among their top 3 concerns when encountering a cyclist on the road.

“When you see another driver using their phone, you’re likely concerned for your safety,” said Liz Kulyk, corporate manager of government and community relations for CAA Manitoba, noting texting for five seconds while driving 90 km/h means you’ve driven the length of a football field – while blindfolded. “Imagine being a cyclist seeing the same. Without the protection of two tonnes of metal, it’s no wonder cyclists feel nervous on the road.”

Cohoe said for the most part, drivers aren’t intentionally making the roads less safe for cyclists.

“When a driver approaches a cyclist on the road, chances are they’re quickly trying to figure out the safest way to manoeuvere around them,” said Cohoe, noting in many cases, a short delay for a driver could mean a huge difference to the cyclist, and could very well prevent a tragedy if that cyclist hit an obstacle that forced them out into the road. “Most mistakes happen because drivers don’t know the best practices for sharing the road safely with bikes. I encourage everyone to try cycling to gain a better perspective of the challenges a cyclist faces on a shared road. It may be enough to help a driver shift their behaviour behind the wheel.”

CAA Manitoba recommends both drivers and cyclists take steps to make their intentions more predictable, follow the rules of the road consistently, and ensure they are as visible as possible.

“Wearing dark clothes with no reflective accessories or lights for a nighttime cycle makes it hard for cars to see you,” says Kulyk. “By the same token, drivers who don’t turn on their headlights are equally hard to see for a cyclist. These are simple behavioral changes that would make for a more predictable and safe road experience for everyone.”

The third and final part in the series will discuss Winnipeggers’ views on how elected officials must move road design and maintenance forward to benefit citizens and all road users for years to come.