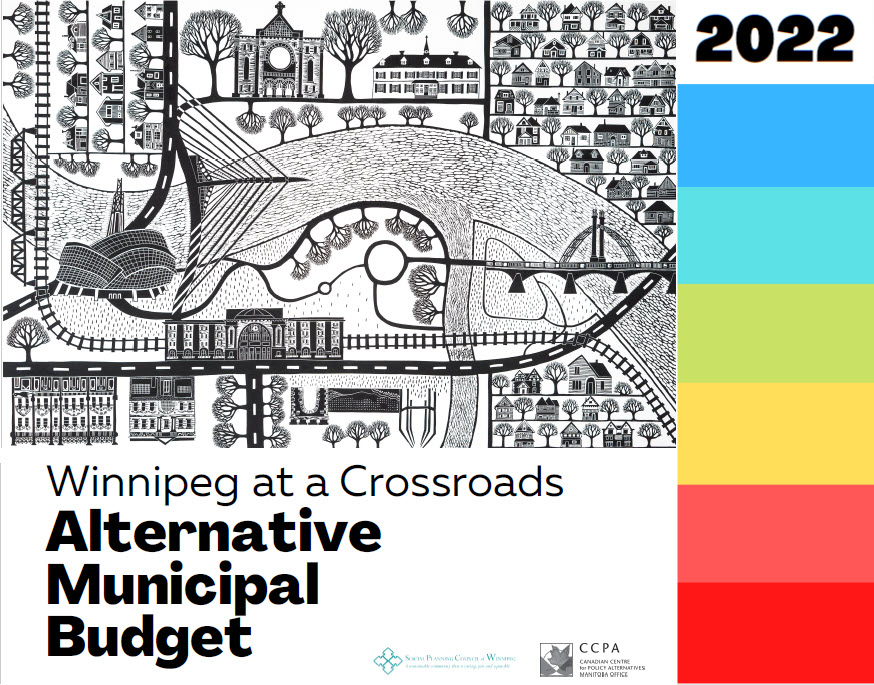 The Alternative Municipal Budget (AMB) educates, challenges, and inspires by detailing specific, fully costed projects and programs that could be included in the city budget to help build a more equitable, sustainable city.

The 2022 Winnipeg Alternative Municipal Budget is a community effort co-written by 27 authors from 18 community organizations. After two decades of austerity and two pandemic years, the City of Winnipeg is at a crossroads. Infrastructure is crumbling and services are facing cuts year after year. A housing crisis, heightened police violence, and the effects of climate change all loom large in Winnipeg. The 2022 Alternative Municipal Budget presents a renewed vision for Winnipeg, based around community approaches to safety, poverty reduction, truth and reconciliation, and protecting the environment. Presented in a balanced financial framework, we show how Winnipeg can rebuild a more just and sustainable city.

Meeting OurWinnipeg 2045’s objective to “Prioritize sustainable transportation as the mobility options of choice” represents a major challenge for a city that has been planned and built for the benefit of cars rather than people over the last 70 years. Despite some significant investments in the walking and cycling networks over the past decade, the vast majority of trips in Winnipeg are still undertaken by vehicle.

That should not come as a surprise. While improvements have definitely been made, our bicycle network remains far from complete. Gaps and barriers abound, and the type of direct, comfortable, and convenient routes linking people from their homes to the destinations they have to travel to as part of their daily lives are rarely in place.

If we have any hope of meeting our climate change goals, we need to institute a drastic shift in the way people get around. That will only happen if we provide people with practical alternatives to their vehicles. Walking, cycling, and busing must be as convenient, or more convenient that driving.

The good news is that many Winnipeggers are looking for alternative options to driving.

We have a willing audience, we just need to provide people with the means to get to their destinations along safe, comfortable, and direct routes.

The Alternative Municipal Budget allocates 20% of roadway funding to the completion of Winnipeg’s walking and cycling networks, amounting to an annual budget of $27.5 million for the Pedestrian and Cycling Program.