Improve Connections to the U of W

With over 10,000 students, staff, and faculty, the University of Winnipeg’s Downtown Campus is one of the Downtown’s most important destinations. If we want to get more people biking more often, we will have to ensure that the U of W’s Downtown Campus is served by multiple low stress bikeways that are direct, convenient, and comfortable. With the high volume of trips coming into the U of W, it is also important that the bikeways we develop to provide access to the University are built to manage a high number of cyclists.

Improvements to the Maryland/Sherbrook bikeways and the recent upgrade of painted bike lane to protected bike lanes on McDermot and Bannatyne Avenues, combined with planned upgrades from painted to protected bike lanes on Hargrave St (Study & Functional Design in 2020), Ellen/Carlton St (Study & Functional Design in 2020), Garry St (construction in 2019), and Princess St (Functional Design 2018) will provide a vast improvement to bikeway connections to the U of W Campus, but the final few blocks between these bikeways and the U of W have little to no facilities for people on bikes. Certainly nothing that would qualify as an all ages and abilities bike route. 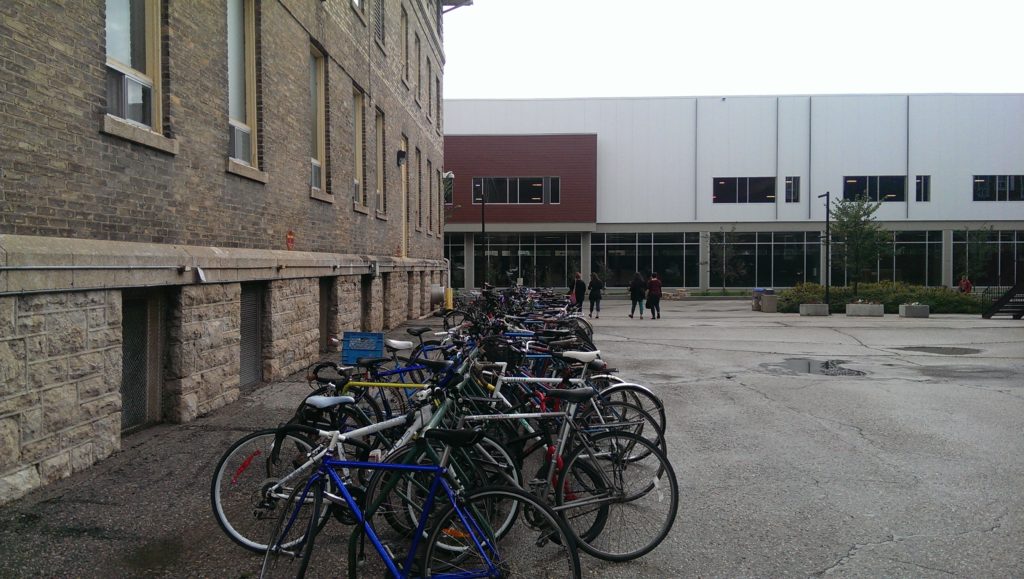 St. Mary Avenue is proposed as part of the Downtown Protected Bike Lane Network in the Pedestrian & Cycling Strategies (PCS), and would provide an excellent connection to the U of W if this plan was followed through on as it provides an almost direct connection from the Downtown protected bike lanes to Spence Street, which acts as pedestrian mall through the heart of the U of W Campus.

St. Mary between Ave is scheduled for a major rehabilitation between Portage Ave and Memorial Blvd in 2022. Including installation of protected bike lanes along St. Mary during the scheduled rehabilitation work will require design work to begin in either 2020 or 2021.

The challenge will be connecting St. Mary Ave across Portage Ave to Spence St. Options to provide space for protected bike lanes might include the elimination of right turns off of St. Mary onto Portage (they can be directed to Balmoral easily enough).

If a way could be found to provide a connection between the Spence St Pedestrian Mall and Qu’Appelle Ave, between St. Mathews Ave and Spence St,and between Spence St and St. Mary Ave, a whole series of connections between key spines in the city’s planned bicycle network could be realized. 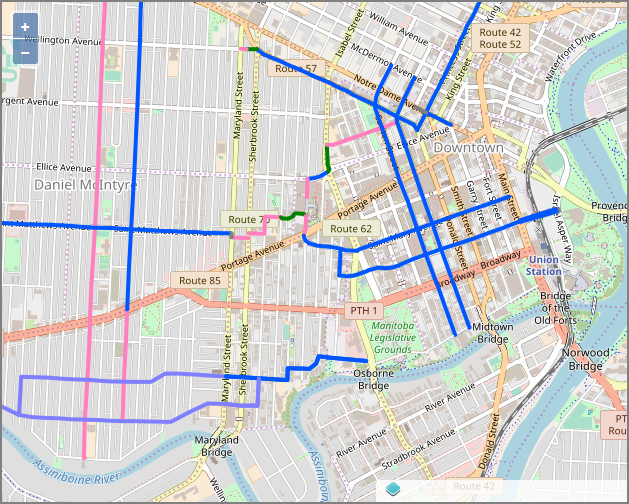 By providing connections to the U of W’s Spence St Pedestrian Mall from St. Mathews, Qu’Appelle, and St. Mary, multiple gaps in the city’s cycling network can be removed.

A substantial benefit to providing connections to the U of W through the Spence St Pedestrian Mall is that such connections would provide direct access to the University’s main bicycle parking area and the UWSA BikeLab.

In the Pedestrian and Cycling Strategies (PCS) adopted in 2015, St. Matthews Ave is identified as one of the network spines of the proposed bike network, providing an all ages and abilities cycling route on pathways and protected bike lanes from the Sturgeon Creek Pathway all the way to Maryland St. From there, the intent of the PCS is to provide a mix of pathways and on road routes along low volume residential streets to complete the connection to the U of W Campus.

It’s likely that this connection will require a couple of property acquisitions as well as signalized crossings of Maryland St and Sherbrook St.

The northern connection to the U of W in the Pedestrian and Cycling Strategies (PCS) is through Qu’Appelle Ave and Balmoral St. One drawback to Balmoral St as a connection through the U of W is that if does not provide access to the planned St. Matthews cycling spine. A second drawback is that there seems to be little political will to remove travel lanes on Balmoral St to provide the planned protected bike lanes.

The suggested route that follows avoids any on-road bikeways along Balmoral St and provides the needed connection between Spence St and Qu’Appelle Ave, with a recommendation to treat Qu’Appelle Ave as a Neighbourhood Greenway instead of a protected bike lane. Traffic volumes on Qu’Appelle are low enough that a neighbourhood greenway treatment that allows for mixing of motorized traffic with people on bikes would meet the needs of an all ages and abilities cycling route.

East bound bicycle traffic would be accommodated between Spence St and Balmoral St by combining the following infrastructure: 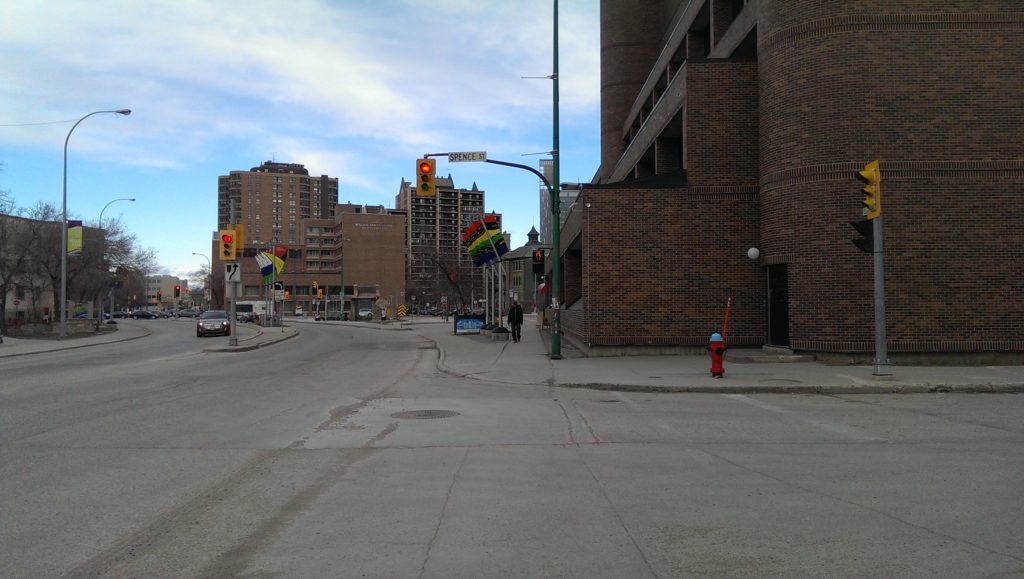 There is room to add a raised bike lane on Ellice Ave just east of Spence St.

West bound cyclists could be accommodated by combining the following infrastructure: 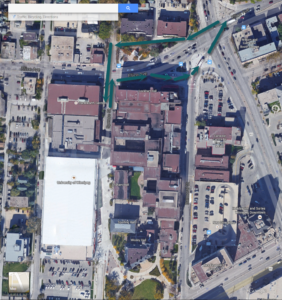 Once across the Ellice/Balmoral intersection, cyclists could be accommodated by building a two way bike path on the east side of Balmoral between Ellice and Qu’Appelle. There is adequate space available for such a pathway. The cycling strategy calls for protected bike lanes on Balmoral. If this path is followed, there would be no need for this pathway as cyclists would make used of the protected bike lanes on Balmoral. 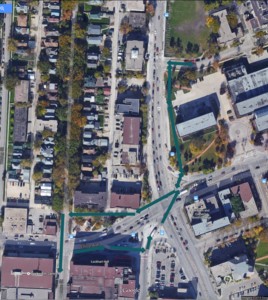 East of Balmoral, Qu’Appelle would function as a neighbourhood greenway with mixed traffic. A pathway could be built through Central Park to connect between Edmonton and Carlton, which have existing painted bike lanes that are scheduled to be converted into protected bike lanes as a short term goal of the cycling strategy. There would be a need to improve the intersection treatments at Kennedy, Edmonton, Carlton and Hargrave utilizing curb bump-outs and traffic signals where traffic demands. These changes would benefit pedestrian and bicycle users.