The 2018 Osborne Village to Downtown Walk Bike Bridge & Connections Study is looking into the potential to build a new pedestrian and bicycle bridge over the Assiniboine River between Fort Rouge Park and McFadyen Park.

The study will provide a preliminary design for the bridge, pedestrian and cycling connectivity throughout Osborne Village to Osborne Rapid Transit Station, Norwood Bridge, bike lanes on Nassau Street, and the riverwalk, upgrades to both McFadyen Park and Fort Rouge Park, crime prevention through environmental design (CPTED), and riverbank stabilization. A detailed design phase will be required ahead of project construction. Funding for detailed design and construction will be contingent on Council approval.

The bridge options look great, as do the proposed changes to River, Stradbrook, and Roslyn, but better connections to the Osborne Underpass are desperately needed. In particular, there needs to be a signalized or grade separated crossing of McMillan/Donald at Scott Street to provide a direct route between the Osborne Underpass and the Osborne to Downtown Walk/Bike Bridge. 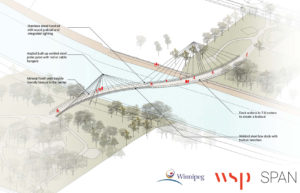 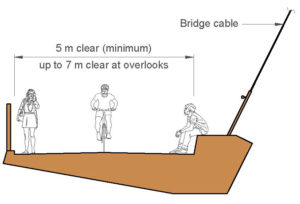 Connectivity Must Not be Overlooked

Developing connections to and from the proposed Osborne Village to Downtown Walk/Bike Bridge will be just as important as development of the bridge itself. If people do not feel safe getting to the bridge, and if the routes to the proposed bridge are not direct,  we can’t expect them to look at biking as a practical transportation option, and we won’t see the full usage that this bridge has the potential to generate if it is properly connected into the city’s bicycle network.

Barring a complete redevelopment of the block bounded by Osborne St, Donald St., and McMillan Ave that would allow for a pathway connection across Donald St and McMillan Ave, the only viable alternative to the crossing of McMillan at Scott is to have people on bikes detour north across Osborne (at the signal near the McDonald’s south of the Osborne Underpass) via Jessie Ave, Pembina Hwy, and Nassau Ave. 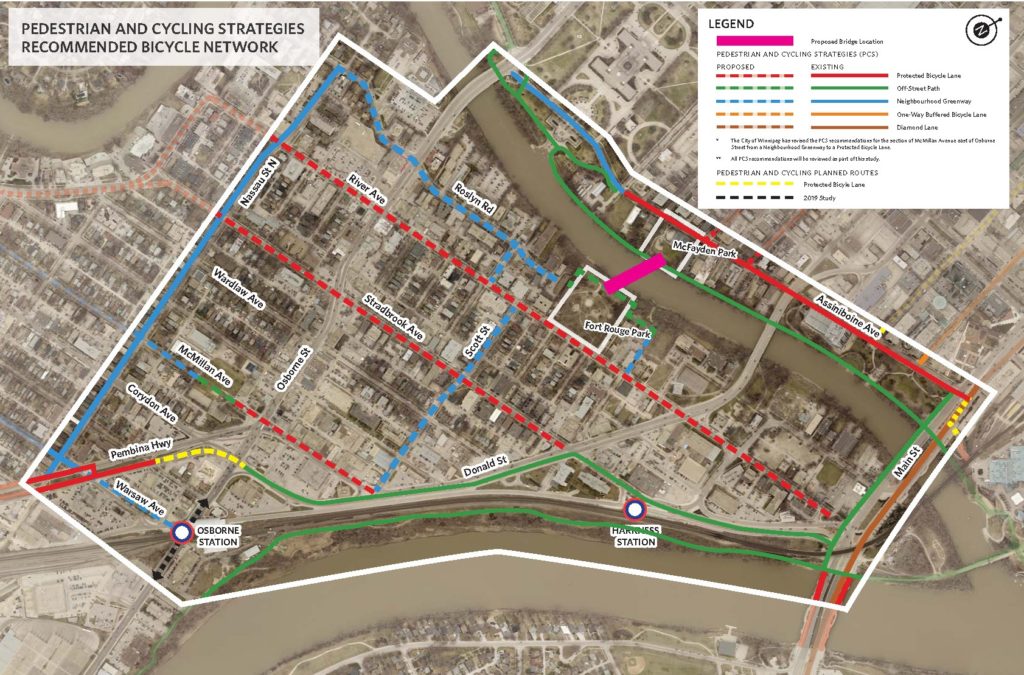 Without a crossing of Donald St at Scott Ave, a 1.3km trip from Osborne St. @  McDonald’s with one signalized crossing (Scott @ McMillan) turns into a 2.1km trip with 4 major crossings (Osborne, Pembina, Corydon, and Osborne). Crossings of Stradbrook and River have been ignored, since they are the same for both routes. By distance, this is a 62% detour. When time is considered (using a 90 second traffic signal cycle), additional signal delays push the detour factor to 83%.

People will use the direct route across Donald St at Scott Ave whether we plan for the safe crossing or not, so we need to ensure that we are providing a safe option. Ignoring this need is to bury one’s head in the sand and absolve ourselves of responsibility for people’s safety.

A crossing of Donald St @ Scott Ave needs to be included in plans for the Osborne to Downtown Walk Bike Bridge & Connections study.

Funding for the Osborne to Downtown Walk Bike Bridge & Connections

At present, there is no funding in place to take plans for the proposed Osborne Village to Downtown Walk Bike Bridge & Connecting Bikeways beyond the preliminary design stage. Both the the Public Transit and Green Infrastructure streams of the Federal Government’s Investing in Canada Plan aim to promote active transportation, so these programs are a natural fit for funding of this project.

All candidates in Fort Rouge-East Fort Garry should commit themselves to moving forward with construction of the proposed Osborne Village to Downtown Walk Bike Bridge & Connecting Bikeways and to including funding for this project as a top priority in the next round of Federal Government funding through the Invest in Canada Plan.

Rehabilitation Plans for the Osborne St Underpass Depend on Connections through Confusion Corner.

Preliminary design for a major rehabilitation of the Osborne Street Underpass, with provisions to widen the underpass to accommodate pedestrian/cycling pathways is currently scheduled for 2019. However, the City of Winnipeg’s 2018 Capital Budget notes that rehabilitation of the Osborne St Underpass will not proceed to detailed design until the pedestrian and cycling network north past Confusion Corner and South to the St. Vital Bridge has been determined and becomes a priority to construct.