Ruby and Banning Streets have the potential to be an important part of the City of Winnipeg’s bicycle network, with direct, low stress access to a community centre, multiple commercial nodes and several schools in an area of the city that has been recognized as having a high potential to attract cyclists.
In order to reach that potential, the city needs to improve the safety and convenience people experience as they walk or bike along these streets. In particular, intersections along Ruby and Banning need improvements to ensure that pedestrians and cyclists on Ruby and Banning corridor encounter crossings that are appropriate to their comfort level and the level of traffic that they are facing.

The city has completed a design study for conversion of Ruby/Banning into a Neighbourhood Greenway. All treatments have considerations for impacts on vehicle, pedestrian and bicycle traffic. The recommended design was determined based on treatments that were ranked highest through public input in terms of cycling comfort and safety, and based on technical analysis. 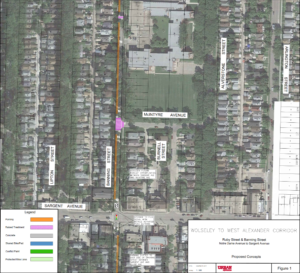 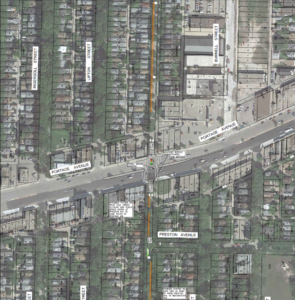 Design features for the corridor, where cycling will continue to go both ways throughout:

Next Steps and Future Considerations

The City will review the project to determine how it fits with other City priorities and future budget considerations. Funding could come from the Local Street Renewals Program, or from the Pedestrian and Cycling Program.